Lethally infectious! Was this virus man-made in Wuhan? And even worse viral memes

Some added information about the disease now labeled SARS-CoV-2 or COVID-19.

First let's have some background. “Gain-of-Function” or GoF is a type of virus research in which experimenters augment a pathogen’s abilities to better understand infection processes. According to Strategic News Service, the NIH stopped funding for GoF studies in 2014, given the danger, before lifting the pause under the new administration in 2017, and publishing guidelines to avoid creating dangerous pathogens. One GoF project already underway was a collaboration between the University of North Carolina and 15 researchers from various institutions, including  the Key Laboratory of Special Pathogens and Biosafety at the Wuhan Institute of Virology where they  have worked actively on bat coronaviruses.

Now dig this: “The novel coronavirus is genomically most similar to  bat coronaviruses, excepting that “the receptor-binding domain of 2019-nCoV was closer to that of SARS-CoV.” In other words, somehow this bat virus acquired the binding surface traits that allowed SARS to attach to human cells. Now there are natural ways this can happen! Generally slowly and at low odds, and at first with low human-to-human spreading…

… but those odds can be augmented hugely — in a lab. SNS points out that virulent strains have escaped from Wuhan and Beijing labs before. Moreover, the Chinese government delayed access to the country by outside WHO and CDC teams for no stated reason.

Note also that the bat virus that SARS-CoV-2 is based upon is not endemic to the Wuhan area; it came from elsewhere and hence likely was not a natural infection at the Wuhan animal market.

As SNS summarizes: “If the PRC government insists that any concerns regarding manufactured pathogens are nonsense, it must back up those bold claims with transparent data, granting the WHO and the CDC full access, and it must cease any further obstructionism in the investigation.”

And now the other kind of viral disease, likely far more lethal to civilization.

In The New Yorker, Adam Gopnik reviews two books (including How to Be a Dictator: The Cult of Personality in the Twentieth Century) about how foolish it is to under-rate despots as merely cruel ogres. More often than not, there is canniness, a feral cunning and brilliance at manipulative use of language. And in many cases — Lenin, Mao, Stalin — a real proclivity for language and articulate writing.  In other cases, the cunning persuasiveness was more direct and visceral, via spoken words.

“Hitler was always unhappy with the slowness of reading and writing, compared with the vivid electricity of his rallies. Where the Marxist heritage - being theory-minded and principle-bound - involves the primacy of the text, right-wing despotism, being romantic and charismatic, is buoyed by the shared spell cast between an orator and his mob. One depends on a set of abstract rules; the other on a sequence of mutual bewitchments.”

And yes, I have said it for years. The deep underlayer of the confederacy - now trying for an 8th time to crush our American Enlightenment Experiment - is romanticism.

Gopnik should have referred, at least in passing, to Hannah Arendt’s classic ruminations on despotism. But his first paragraph is noteworthy, even if that’s all you peruse.

We are indeed, amid a rare glimmer of light across millennia of brutal darkness imposed by our worst (if Darwin-explicable) male drives. We must fight for this enlightenment experiment not just because the alternative has proved relentlessly stupid and cruel, but because our way is so vastly more productive of all things — science, art, wealth, and diversely accountable progress.

Indeed, those traits are why today’s would be tyrants have only one way forward. Encouraging hatred of every single thing that makes us smart or good.

The evangelical community is riven apart over whether to condemn or to worship the most opposite-to-Jesus liar-narcissist-bully-traitor imaginable. What I’m looking for is how this falls out along denomination lines! Whether Methodists and Presbyterians align with Episcopalians Buttigieg and Biden...

“We’re all flawed humans and sinners,” they proclaim, shrugging off DT’s daily spasms of bile, hate, theft, abuse and schoolyard bullying, an excuse they never allowed for Clintons or Obamas, who – unlike all Trumps - attend church and can recite the Apostle’s Creed from memory. Theirs is a grudge that can never be quenched, despite 25 years searching in vain for substantial and verified sins by either the Clintons or Obamas.

Might one demand some contrition from the Russian mafia-oligarchs who used to be deemed satanic (deservedly so) when they oppressed and murdered and conspired against us as communists, but who now get a complete pass from our right-wingers because they claim to be  “Christian traditionalist”? The very same guys! Might our redders at least demand a surface show of penitence, before handing our country over to them, or denouncing our own “deep state” professionals who are blocking Putin’s perfect putsch?

Now news that the number of Southern Baptist and correlated ministers accused of sexual crimes is approaching 1000 and accelerating as victims come out. And 263 have been convicted. And leaders of the GOP party-of-turpitude lead dems in every category of sin, by far. It didn’t start with Trump. Look up Dennis Hastert. Look up the marriages of Newt Gingrich or recall who was the first divorced man in the White House. Or which states lead in teen sex, STDs, domestic violence, gambling and so on.

Demand wagers on all of the above! Watch how quickly the yattering moralists flee, just like those schoolyard bullies.

== The crux challenge to your decent conservative neighbors ==

When folks ask how anyone would support a thieving, treasonous, infantile, nasty, narcissistic playground bully who is the most opposite-to-Jesus human on the planet, you have only to picture who would deem those traits to be positive things. 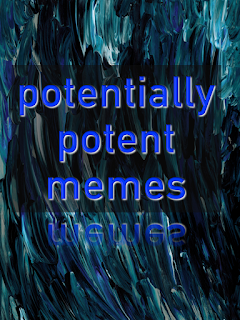 The first two words – “thieving” & “treasonous” - are the ones of interest to “ex” communist KGB agents, Saudi murder-princes, carbon lords, gambling moguls, monopolists, Mafiosi and inheritance brats who think they can “control” this populist madness… the way Prussian barons thought they controlled Hitler. They think they can guide their blackmailed assets – Trump and the GOP - into “taxes and judges” while dismantling our sciences, alliances, rule-of-law and other enlightenment strengths, eliminating the “fact elites” that block their oligarchic power…

… all while still maintaining the modern systems that keep them rich and safe from genuine populist revolt. Good luck with that.

Meanwhile, their billions spent on propaganda encourage white working class “populist” resentment of fact elites and law, by portraying both as weaknesses. Ponder that. When we complain about all this – especially when offended by Trump – we are nerds on a playground, whimpering “that’s not fair!”

If any of you who recall what that jungle-feudal playground culture was like – way back in 8th grade – then you remember that whining “That’s not fair!” was mother’s milk for the bullies. They loved it! As today’s MAGA fools adore every single thing ol’ Two Scoops does to upset or enrage us. (George Lakoff laid all of this out more clearly than I can.) Take for example the quintessential bully moment that distilled everything loathsome about Trumpism, when he mocked the disabilities of a reporter, in order to deflect serious questions.

Any person possessed of minimal human decency would have then-and-there declared anathema such a wretched person along with all who cheered him. And yes, there are decent Americans who cringe at the meanness and fact-hating and stupidity and enabling of foreign despots. I reiterate, we must reach out to otherwise-conservative folks like military officers and citizens of Utah, who hate that shit!

We need to make clear that we are not seeking an extinction of American conservatism, but resurrection of earlier versions that admitted the primacy of decency, logic, empathy, courtesy and facts. That decent American conservatives throw off the movement’s lunatic, plutocrat and Muscovite and Salafist hijackers, before coming back to rejoin us at the negotiation table. We must promise to listen, if they’ll do that. But first they must end – decisively – their affiliation with evil and treason.
Posted by David Brin at 2:41 PM 114 comments:

Our first newsletter in three years has gone out! Here’s the web version. Lots to report and new books to enjoy!
First, alas, I must report that Escape From Kithrup - the awaited next chapter of the Uplift Saga isn’t ready! (By a fair amount, alack.) But meanwhile, here’s good stuff to (star)tide you over! Starting with... 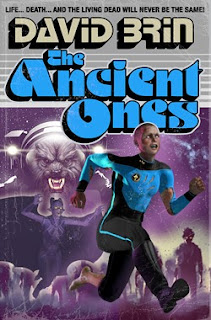 * The Ancient Ones: My very new novel - a light-hearted space comedy - will feed your under-nourished guffaw-neurons! Kindle and POD editions go live on the equinox (3/19/20). Star Trek meets Hokas & vampires.

Is comedy hard? Groan and laugh at sample chapters, then pre-order!
Demmies aren’t so bad. They mean well. Impulsive and exasperating, sure. Often brilliant, cheeky, moronic, volatile, always astonishing... did I mention exasperating? The Alliance of Worlds wouldn’t be the same without them. Some would prefer it!
With a lovely-fun cover by Patrick Farley! 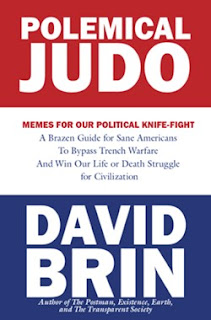 * Veering from the comically absurd to the seriously insane, I skewer today’s crazy politics in Polemical Judo. Our current crisis needs fresh perspectives! 100+ tactics may help our struggle for civilization. Sample chapters here - then help fight for a better future.

* A Need for Heroes: a stand-alone story about courage - and saving the world, now on my website (Excerpted from Earth).

* Sundiver, my first novel, came back into our hands after 38 years. We made corrections, gave it a new cover and introduction. Now available as an ebook and paperback versions on Kindle/POD. But - Shout if you want that long-awaited, collectable hardcover!

* All my short story collections - including The River of Time, and Otherness as well as Insistence of Vision - are back! (My best work.) We've also re-released Heart of the Comet ( my collaboration with Gregory Benford).

* The video for Existence, by web artist Patrick Farley, is 3 minutes of sheer, chilling beauty. 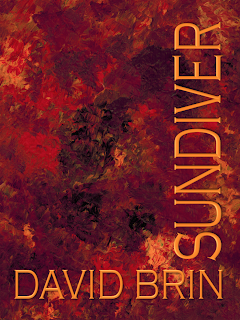 * In the recently released volume After Shock: Reflecting on 50 Years of Future Shock - a hundred futurists explore bold ideas about the human future; I have an essay debating the ideas of Yuval Harari. A volume with some Big Thinkers!

Sci-fi-nerds save the world? Picture some weird event. Starships fulla inky squids. Trees walk or cyber-newborns talk! A commission (I’m on some) hurriedly advises governments. Might 80 years of thoughtful SF tales prove useful? With UCSD's Arthur Clarke Center, I set up TASAT - There’s a Story About That - to host discussion of wide-ranging what-if scenarios - and maybe someday save us all. Subscribe. Join the Group Mind! (Web-admin folks needed.)
* Speeches and consulting: See over 300 NGOs, companies, activist groups and agencies I’ve consulted or given keynotes about a future that slams into us with wave after wave of onrushing change, both down here and in space.
* Cool watchables!
Brin on Artificial Intelligence (A.I.)
Will humanity diversify?
The plague of getting ‘mad as hell.’
Shall we lift the Earth?
“Project Neo.”
Others range from SETI to ESP to colonizing the galaxy.
Want more? Find frequent news and views on the always-provocative Contrary Brin blog.

I may speak in your area. So check my calendar. This summer, I'll be in D.C. as well as in Seattle in July - for Westercon: The 73rd West Coast SF& F convention.) See you in the future!

Finally: Okay it's been a Sci-Fi'ish year, even Twilight Zonish! But there's hope for an ambitious future and worthy civilization. Make it so!

Face-Recog is loose. Adapt to this new world (You can!)