Alert!  The New Horizons spacecraft is just 49 days away from Ultima Thule! On New Year's morning. After that spectacular Pluto fly-by a few years ago, you are getting your money's worth from the few bucks of taxes you spent on this spacecraft. But, then, you almost always get vast returns on our shared endeavors in science and doing glorious things. You will get a disease sometime that is treatable because we do this. Do not let dour snarlers talk you out of acknowledging what mighty beings we can be. Already great.

Becoming greater by the day.

Before diving in to lots of news and controversy about science fiction… … here’s some interesting science for you. It seems that researchers surveyed readers of science fiction and fantasy score better than readers of any other genre on having “realistic attitudes about relationships.

I've long held that SF has generally been more enlightened than its time. Blatantly, many of today’s authors and fans are seeking to use our exploratory, courageous genre to push those horizons even farther, and that’s terrific!


The only quibble I have is with any rage against those earlier waves in sci fi, calling them 'repressive,' when each generation of SF authors were – on average – bold at challenging assumptions in their own eras. Notwithstanding some genuine troglodytes and their racist/sexist works (you can always find anecdotes and particular villains), the field is – and was – ahead of its time, even in the eras of H. G. Wells, Mary Shelley, Alice Sheldon and Edward Page Mitchell, C.L. Moore and Leigh Brackett. We can wince at many of the Cro-Magnon infelicities of 1950s or 1980s sci fi, for sure! But failing to put them in context is a form of unreasoning hate that blinds us to what many of those creators were.  Fighters for justice and pioneers.

Spreading the blather around, my Wordpress blog now carries my riff about the Animated Storyboard, a concept that – if done properly (no one has, yet) – could unleash a wave of cinematic creativity like none yet seen, liberating small, writer-led teams to create vivid dramas, whether as first drafts or as final works of popular art. Some recent offerings suggest this day may be about to dawn.

We have favorite movies. What of individual scenes? I look back and find that most of my most-loved were moments when the music almost took over. Sure visuals and story were vital in each of these. But music brought your emotions to a peak.
In reverse order:
- Lawrence bringing Gassim into camp off the Nefud desert.
- Zulu warriors chanting a macho pas de deux vs. singing Welsh soldiers at Roarke’s Drift.
- Diva’s Aria in The Fifth Element.
- “Theology/Civilization”... Conan with Subotai… powerfully reprised when Subotai comes to save him from the Tree of Woe.
- “The White Tree” The best scene in the Lord of The Rings is one that's all about communications tech and the connections among people.
- Roy Blaty’s soliloquy -in the stunning, Vangelis-lifted finale of Blade Runner 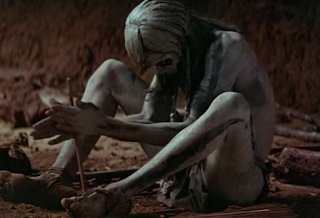 And possibly my favorite scene in all of cinema — the pivotal moment in Quest for Fire, when our hero encounters a new technology and sobs as gradually — accompanied by low cello thrums of realization — it dawns on him that his people will have the power of gods, and they will never be cold again. Watch from 1:12 on this video clip.

Mason Rourman wrote in with some good ones:
- The moment in Serenity when Serenity exits the stellar cloud chased by the Reavers, and the Operative says "Target the Reavers. Target the Reavers! Target everyone! Somebody fire!"
- The "romantic" scene in The Name of The Rose when the peasant girl sneaks in to touch Christian Slater for his purity.
- The Wrath of Khan (original version), when Khan is gloating over Kirk after leaving him on Ceti Alpha V. (Heck, every scene of that flick.)
- The sequence from The Shawshank Redemption when Andy locks the door to the office, puts on Mozart, closes his eyes, and the entire prison stops to listen.

Scott Miller suggests: The flight to Station 5 in 2001 with The Blue Danube waltz, and the swelling brass section of John Barry’s score at the end of Dances With Wolves when Wind In His Hair proclaims his undying friendship from the ridge top.

Come down to the comments section and offer your own!

How cool would it have been, if Steven Spielberg had succeeded in getting Gene Wilder to play Halliday in "Ready Player One?" You know, the recent remake of Willie Wonka? A hugely fun film... though of course I'd have made suggestions. The shallowness of the characters' motives, when there's a world still to save, could have been resolved with minor tweaks and brief mention of Universal Income or "purple wage." Several concepts from my novel Existence would have - in a few sentences - laced some real gravitas -- and hope -- into the background, without interrupting the fun one bit. Ernie Cline did try, in his novel.
Yeah, yeah, then there are the obvious things; like where were the cops (or any institutions) the whole time till the end? See my article The Idiot Plot.
Spielberg is usually better at that.

Biggest flaw, alas... if "IOI" is the SECOND biggest corporation in the world, with the Oasis Company far bigger and richer, why does the Oasis Company do nothing for the whole film? We see no Oasis actions, employees, buildings... no one noticing they are being hacked by an evil competitor, what?

The tragic thing is that plot glitches like this are so easy to spot and fix. I should open a consultancy.

The new Tomb Raider remake with Alicia Vikander sure was a veer away from Angelina Jolie’s version. I enjoyed Jolie’s rendition of Lara Croft as an uber-confident James Bond with long braids – it was time – but the plots and stories were sillier than anything raved by a nine-year old. Vikander’s Lara is more vulnerable as she comes to realize her talents amid a great deal of painful-bruising transition. She earns her pay in action scenes of grueling relentlessness… hey, it’s Tomb Raider. But the plot realization was actually… pretty sensible, non-mystical and pleasing.  (Oh and always nice to see Derek Jacobi.)

== Why some ‘social scientists’ speak ill of SF ==

In contrast, an essay on Motherboard: “Science Fiction Is Not Social Reality,” by anthropologist S.A. Applin, proclaims the shallow uselessness of SF visions. “The tech industry is inspired to create our world from linear, scripted science fiction stories.” Alas, this person stacks paragraph after paragraph that are separably drivel, and but combine into much worse. Take this stunning assertion: "Those tech creators and tech billionaires who are influenced by Science Fiction seem to assume that because things in Science Fiction work in the society and culture of those created future-set universes, there is an expectation bias that they will work in our real life and present, without much testing or oversight."

Examples, please? Cite one - even one example of that happening, even once?

Waving loosely in the direction of five TV/movie franchises, without a sentence of actual, supporting evidence or analysis, Ms. Applin doesn’t even nod toward the higher craft of literary SF gedankenexperiments, from Ursula LeGuin to Neal Stephenson to Alice Sheldon to KS Robinson. Worse, she does the thing most-boringly common among all-too many “social critics.” She preens as if she invented suspicion of authority – or SoA - instead of imbibing it all her life from every movie she ever watched... and especially from science fiction.

Take this stunning assertion: "those tech creators and tech billionaires who are influenced by Science Fiction seem to assume that because things in Science Fiction work in the society and culture of those created future-set universes, there is an expectation bias that they will work in our real life and present, without much testing or oversight."

“Seem to assume…” Yes! We can see that’s the way things seem, to you. Yet, the challenge remains. Again, cite one -- even one -- example of that assumption appearing in a widely influential science fiction novel or film! Let alone your loony-counterfactual assumption that the message is ubiquitous.

In fact, the very criticisms voiced in this article by Dr. Applin are almost omnipresent in most Science Fiction, especially in this era. Arrogant, over-confidant innovators abound in SF cautionary tales. Generally, protagonists react to some calamity-producing error, whether technological, personal, or societal.

We face dire problems of uneven distribution of power in modern society, including undue concentrations in the hands of tech zillionaires. I’ve long held – in fiction and nonfiction - that flows of information must be reciprocal and empowering of common folk. But Dr. Applin’s solution? "The time has come for these labs, offices, startups, corporations, and entities to hire Social Scientists to help them understand that their visions may not mesh with our realities..."

Ah! So. We should hire "experts" like you, then, who cannot even tell us where they got their own suspicion of authority reflexes? Next time you treat us to a lengthy job-pitch, please leave out the ignorant, reflex diss at the one genre of literature that genuinely explores the realm of danger and opportunity looming ahead.

Why give so much time to an ignoramus? Because you all need to be armed against this kind of loony  sanctimony that repeats clichés diametrically opposite to all fact. And now you know how to demand: "Name one example!"

In complete contrast, scholar Tom Lombardo cogently elucidates how science fiction has informed and nurtured to burgeoning field of futurism.

…which has led to commercial futurist companies like Scout and SciFutures.

== And the worse lunacy of the other side ==

You’ve likely heard of The Turner Diaries, a white supremacist wish-fantasy tract that sells like hotcakes at gun shows and inspired Oklahoma City bomber Timothy McVeigh.  This article unveils a few others in the same sub-genre… though the best, by-far, was penned satirically long ago by Norman Spinrad – The Iron Dream.

I hear that Spinrad's book is actually read straight now (by morons) in some places, while non-morons should read it for a chill.

What this NY Times author probably doesn’t know – few do, in the West – is that there are similar Identity-Rage-Fantasies in a wide variety of languages. Quite a few in which Han Chinese wreak vengeance, for example, upon the West. Arab and Israeli, Serb and Croat, vengeful apocalyptic drool goes back to the Book of Revelation and beyond.

But the mother lode is in Russia, where turgid, poorly-written and over-the-top-gory novels celebrate spetznatz heroes who slaughter Americans by the truckload, by the city-load and often down to the last man. (Women are spared, if they can serve.) We are under a broad-spectrum assault by a world filled with frustrated males needing someone to blame… and the planet’s oligarchy would rather turn that ire toward other races and toward all the fact-professions, than let it focus where it’s deserved.