Is it possible to fact-check?

There is no greater priority in the USA than finding a way to debunk lies and check on facts. All sides hurl assertions and leave it to citizens to decide which ones to believe. But in today's partisan echo-chambers, the choice nearly always depends on what sounds and feels "truthy."

This is not the way adults operate! Politics used to at least bear slightly on confirmable-falsifiable factual evidence. That is, it did, before we entered a virulent 8th phase of the American Civil War.

Ponder what might happen if we all had a reliable place - or better yet, a suite of diverse and even competing places - where trustworthy folks could demolish some, maybe most, of today's howlers? Indignation-incantation junkies on the far-left and today's entire-right loathe that idea. Especially, Fox and ClearChannelRadio fought hard to end the Rebuttal Rule that would expose their audience to "here's disproof!" refutation. 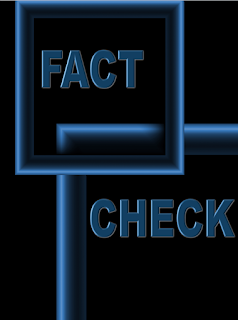 Those attempting to verify evidence face a skilled immune system. Confederates denounce any attempt at fact-checking as "partisan."

"So what’s the basis for claims that, say, PolitiFact is biased?" explains Paul Krugman in Facts Have a Well-Known Liberal Bias.

"Notice the implicit assumption here," -- Krugman concludes -- "namely, that impartial fact-checking would find an equal number of false claims from each party. But what if – bear with me a minute – Republicans actually make more false claims than Democrats?"

Those who try my Questionnaire on Ideology, face a discomforting realization - that all of us have the same reflex: "My adversaries believe what they do because of propaganda or malignant purpose; but my beliefs come from logical appraisal of the evidence."

Can "fact-checkers" be biased? Sure. That's not the smoking gun.

In fact, we're all koolaid-drinkers, to some degree. (We're human, after all -- at least until uplift or the arrival of AI.)  But the American/Western renaissance always depended on a majority of our citizens tempering this willful delusion with a grounding in pragmatic tools of evidence, even a willingness to murmur the sacred incantation of science: "I might be wrong."

And that is why the risen Confederacy must wage all-out war on every fact-centered profession.

The smoking volcano is the confederates' refusal to ever offer up their own plan for a neutral fact-checking service!

Over and over I have explained... confederates still have one zone where they accept the primacy of fact -- in wagers! Their macho will shrivel if they are faced with a bald challenge:

"We dare you to offer up names of top conservative-adult sages who can help set up a neutral fact-checking service!"
Consider how this confrontation - (to date never used by even a single pundit, journalist, or Democratic politician) -- puts them in a bind.

--  If they refuse, they can be taunted with great effectiveness, that they are too cowardly to actually check on the 'fake news.'

--  If they offer up loonies, that will help drive off their last fact-people. And mark this well: there are at least 10 million agonized "ostrich republicans" who may desert that fragile coalition, as many recently did in Alabama, if they get a 'last straw.'

--  If they offer genuine adults to such a fact-checking endeavor, then those adults will betray the GOP and Fox, by saying: "that's not true."

After the last 18 months, can we all agree that we need new tactics!
Can we at least try this one? 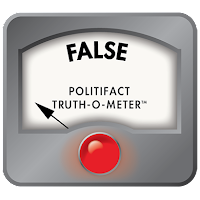 Make no mistake: the War on Science - and the war on all fact-using professions - constitutes the core of this treason. If we confront it boldly, then there may be a light.

By letting ourselves get distracted into symbolism and minutiae, we prove ourselves to be the fools.

Muslims celebrating on the roofs on September 11, 2001. Ted Cruz's father being involved in the JFK assassination. The largest inaugural crowds ever. Obama wire-tapping Trump Tower during the 2016 campaign. Three to 5 million people voting illegally in the election. And now DT is back to Birtherism! Claiming "evidence" he never shows, and plans to "sue" the almost twenty women who accused him of sexual assault... but never getting around to suing.

Or asking the IRS to stop the "audit" so he can share his tax returns. Or asking them to verify THAT there is an audit. "In Trump's first 298 days in office, Trump said 1,628 things that were either misleading or totally false, according to calculations made by the Washington Post's Fact Checker."

My contribution to all this? Just perspective. (It's my job.) Squint and realize: this is how all our ancestors lived, all the time! No one could tell the king, or priest, or lords "that's not true and here's proof."

We have lived in what was - historically - a bizarre experiment in reciprocal criticism and accountability. Adam Smith and the American Founders tried to embed this magical solution to human delusion, and it still lives! It has given us everything -- wealth, science, freedom -- but it is being torn down....

...by those who seek to restore feudalism. And it isn't just the oppression we should fear. It is the concomitant quality that always comes with that dismal formula. 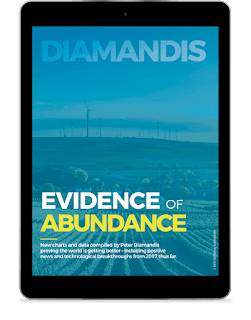 Peter Diamandis offers an excellent case for optimism! This ebook - Evidence of Abundance (free to download) should help stoke your determination not to let troglodytes yank us backward. Technology isn't the only factor than can help save us! Satiability, deferred gratification and avid use of the problem-perceiving prefrontal lobes are all urgent.  All of those can combine with guarded optimism and help us confidently act to save the world and our children.

Peter’s goal here is to help you “protect your abundance mindset despite this barrage of negative news. Consider this ebook as “conversational capital” for your dinner table conversations or some inspirational reading for your travels" this holiday.

== Using a private KGB/Smersh/SECTRE to bypass the “deep state” ==

If even a quarter of this is true, it demonstrates just how confident the new plantation lords are, that they’ll soon cancel or over-ride the foremost American tradition: rule-of-law. 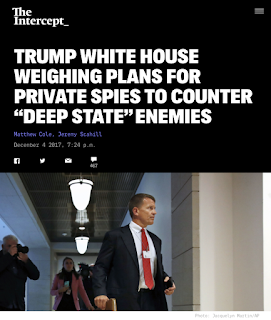 Former Blackwater head (and Trump cabinet-brother) Erik  Prince is apparently setting up - with Oliver North and financed by Trumpist oligarchs - a secret and private intelligence agency, intended to supply both information and ‘operations’ independent from our sworn officers in accountable agencies like the CIA and FBI.

Those sworn federal officers are deemed too much part of the reviled “deep state”… the code phrase to dismiss fact-users who are answerable to laws and Congressional oversight and a free citizenry, and not to deep-pocket oligarchs. Horrors. Can’t have that.

How to stand up to the Kremlin: in the hifalutin-cogent journal Foreign Affairs, former VP Joe Biden and Michael Carpenter show in-detail that we are already mired in a kind of existential struggle… one that science fiction legend Frederik Pohl called “Cool War.” (Get the novel by that name. Its current plausibility will terrify you.)  Biden and his colleague lay out overwhelming evidence that a foreign regime - actually about two dozen, united in alliance — are using every means at their disposal to bring down America and the West and the entire Enlightenment Experiment.

In a few places, Ol’ Joe slightly oversimplifies: “In contrast to the Soviet Union, however, contemporary Russia offers no clear ideological alternative to Western democracy. Russia’s leaders invoke nationalist, populist, and statist slogans or themes, but the Kremlin’s propaganda machine shies away from directly challenging the core precepts of Western democracy: competitive elections, accountability for those in power, constitutionally guaranteed rights, and the rule of law. Instead, the Kremlin carefully cultivates a democratic façade, paying lip service to those principles even as it subverts them.”

In fact, the members of the anti-west consortium have made it plain that very very concepts of democracy and rule-of-law are to be disdained.  Moreover, we see the rump intelligencia on the U.S. right parroting identical themes, e.g. declaring that “democracy and freedom are incompatible.”

(Here is where I demolish that obnoxious mystical catechism.)

There are many aspects that Biden leaves hanging… like what will happen to Siberia, when Russia’s population plummets while millions of Chinese cross over as “businessmen.” (I'm taking bets over whether Siberia has already been pre-sold, while our eyes are diverted to the South China Sea.)

Then there is the U.S. right’s obsession with symbolism — that all is well, so long as former KGB agents wear crosses in the Kremlin, instead of hammers and sickles. (The symbolism obsession, made plain.)

But Biden’s detailed appraisal of corrupt and corrupting practices merits your attention, your sober reflection… and it means that moves by certain western officials to discredit and weaken NATO amount to… well… I am thinking of a T-Word.