Is there a goal in all of this: the argument for a paranoid, worst-case scenario

Many are trying to make sense of the Trumpist Revolution, seeking to decipher some pattern or plan, under all the chaos.  And like those blind, wise men fondling different parts of an elephant, smart people are yelling “aha!” and proclaiming they have it sussed. Take this theory by Michael Klare, on Salon: Is Trump launching a New World Order? 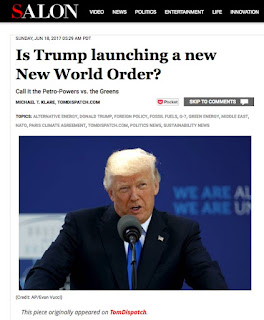 “Domestically, he’s pulled out all the stops in attempting to cripple the rise of alternative energy and ensure the perpetuation of a carbon-dominated economy.  Abroad, he is seeking the formation of an alliance of fossil-fuel states led by the United States, Russia, and Saudi Arabia, while attempting to isolate emerging renewable-energy powers like Germany and China. If his project of global realignment proceeds as imagined, the world will soon enough be divided into two camps, each competing for power, wealth, and influence: the carbonites on one side and the post-carbon greens on the other.”

Well… if you squint hard… maybe. Especially if you throw in policies blatantly favoring states like Texas, Wyoming, Oklahoma and the Dakotas, arm-twisting companies like Boeing to shift jobs from green states along the west coast to rescue red ones, like Kansas.

But this axis of fossil (fuels) is at-best overly simplistic.  The Trump Administration promised to be a tiger with China, but has turned into a purring lapdog. The White House overflows with zealots who want war with Iran, an oil state. A contradiction that eases when you realize how much Putin and the Saudis will benefit, if Persian oil is removed from the market.

No, you need to add more ingredients, to parse this out, like the administration’s savage attack upon U.S. science. Not just efficiency and sustainable energy, but also the R & D that gave America its shale gas and oil boom, and its first brush with energy independence since the 1960s. Without that research support, small-scale companies might have to sell out to Big Boys, like Exxon, and petroleum independence could become a fleeting thing.

(Noteworthy: Trump is the first president since Hoover not to appoint a scientific adviser -- apparently even the radically weird candidates he had been interviewing were prone to, occasionally, saying the forbidden words: "that's not true." Under Trump, the White House Office of Sciene and Technology Policy (OSTP) has been eviscerated, as Newt Gingrich earlier demolished the Congressional Office of Technology Assessment (OTA.)

In fact, studies have long shown that at least half of the U.S. economy arose from our spectacular advances in science and technology — which is why our core confrontation with China should not be about currency manipulation or trade sanctions, but the stunning, bald-faced theft of our crown jewels of intellectual property.  Yet, the Trump Administration has backed off from such efforts, begun under Barack Obama. Meanwhile, the GOP budget plans burn through or gut almost every kind of federally supported R&D.

Michael Klare’s article is worth reading.  He makes a strong case, but doesn’t step back to see a bigger picture.  Yes, Trump is doing everything in his power to help dictators, especially most — not all — of those who count on us continuing our fossil fuel dependence.  This maps onto those U.S. states that Trump favors, as well. But the model needs expansion.

Under their current strongmen, Turkey and the Philippines have joined the loose alliance being corralled by Putin’s Kremlin, in an arc that stretches from Ankara to Manilla.  While the Beijing mandarins are navigating their own path, they are at minimum fellow travelers.

Naturally, I like Stephen Colbert.  I mean, what's not to like? At least once a week, he drops some sci-fi or fantasy reference. A couple of months ago he quoted Salvor Hardin, the mayor of Terminus in Isaac Asimov's Foundation series! (Which I completed for Isaac.)

So it's with trepidation that I disagree with this paladin of civilization, who at one point said: "Donald Trump is not a symptom; he's the disease."

Oh, that got lots of applause!  But no, no, no.  Elsewhere I go into details as to why this fellow is much less dangerous than most folks think, because all of our civil servants and the FBI, intelligence agencies and most military officers can see that there's a cranky toddler in the White House. They can be trusted to prevent worst-case things. And hence, all the "impeachment " talk is just loony.

A Pence presidency will be far, far worse. Instead of leaky chaos, we'd have a White House packed with tightly disciplined Dominionists bent - with deliberate malice and fierce intent - upon bringing about the end of the world. Picture that, Stephen, please.  And let's plan out the campaign. 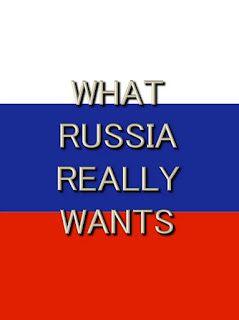 This article by Max de Haldevang on “What Russia Wants” adds insight into why Vladimir Putin - with support from much of the Russian public — seeks to restore a sense of empire. Indeed, not just a sense, but the reality.

Moreover, the mullah faction in Iran is blatantly cozy with Moscow. As we speak, Iranian volunteers fight side by side with Russian advisers, in Syria. When Steve Bannon rails about a coming U.S.-Iran conflict, all it accomplishes is to make Tehran more dependent on the protection of Russia’s nuclear umbrella, turning the Persian Republic into a Kremlin client state, despite the clear wish of that nation’s huge and educated middle class to join the modern world.

But all of this leaves out the biggest and most rabid elephant in the room — the concerted, 25-year campaign to destroy America’s political resilience.  Our once-renowned genius at negotiating pragmatic solutions to problems… partly through a once-respected process called “politics.”

Starting with Newt Gingrich, then the “Hastert Rule,” and enforced ferociously by Rupert Murdoch’s media empire, the U.S. right shifted from tough bargainers at the political table to adamant and absolutely rigid obstructionism. Controlling Capitol Hill for 20 of the last 22 years, the GOP ran the laziest and least productive Congresses in U.S. history, passing fewer bills, per capita, holding fewer hearings — even on topics that obsessed them — especially if you subtract theatricals like Monicagate and the Benghazi Imbroglio, that went nowhere.

Add to this the incitement of levels of red-blue animosity not seen since the Civil War. Now stir in Donald Trump’s deliberate spurning of our oldest friendships and alliances. Throw in a stench of Kremlin collusion in the top ranks of the Republican Party, and a picture starts to emerge.

The only trait that unites all of these factors is that each and every one of them weakens America and the West.

How ironic! I have long expressed skepticism toward most conspiracy theories. Yet, in this maelstrom, most of those who are sniffing at the Russia Collusion stench seem unable to step back and smell the obvious. This is not about getting the U.S. to ease sanctions on Moscow.

It’s not about propping up an already-doomed fossil fuels industry — though that (and an Iranian War) would certainly help Trump’s Saudi-Russian-Murdoch-Koch patrons.

It is about weakening the west and its entire set of enlightenment values, from democracy and science to transparency and negotiated politics.

It is already war. Vladimir Putin has said so, as do the Saudis, in the textbooks that they give to boys in madrassas all over the Wahabbi-influenced world. It is already war. And our capital has been seized, and fools like the D.C. shooter only hurt the cause.

With Washington occupied, the revolution that stunned the world with creativity and gradually improving goodness since 1776 is exiled to Berlin, Paris and Sacramento, where the resilience and brilliance of our renaissance will face its greatest test, since the 1940s.

Elsewhere, I talk of a vastly important tactic that could help us to march through this madness, all the way from mountains and plains to the sea.

But first, we must awaken. This will be won by reminding our fellow citizens that men and women of knowledge and skill are not the enemy. They are the people who will lead us to victory.
====================
Addendum:

Is this posted remark true or a rumor? Write in to comments!:  “The RNC had a plan even before Trump was their candidate. They used a system called Crosscheck (now adopted in over 30 states) to knock registered minorities off the voter rolls. The system checks if someone named James Washington (for example) is registered in more than one state, then knocks someone in Georgia and someone in Pennsylvania off the voter rolls (it's supposed to check DOB and middle name, but it doesn't and that's proven) and then they show up to vote, are told they are not on the roll (even though they voted there for years) and are given a provisional ballot which is later checked against the same roll and thrown away (no evidence).”