Revenge of the Deep State?

"Deep State" is a buzz phrase that's been around. It stands for the obstinate obstruction that political reformers may face - even when they win elections - from a nation's civil servants, bureaucrats, contractors, influential stakeholders and - especially - the security apparatus.  The term was used for many years on the left, citing the last moderate Republican president, Dwight Eisenhower, who warned of excess influence by a "military-industrial complex." But the term faded a bit into the worm-eaten woodwork of paranoid fringes.

Now, "Deep State" is back, big-time. Suddenly it's being pushed by the far-right to explain the hostility they face, not just from bureaucrats but from all of the security services and "entrenched elites." Or, as my neighbor, Jordan Greenhall put it recently, in a highly circulated posting, we find ourselves in a manichean struggle  between a conservative “Red Religion” vs. the liberal “Blue Church” globalist establishment -- our current “Deep State." 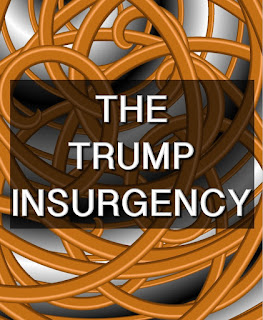 As Greenhall put it: "My assessment is that the Trump Insurgency has identified the Deep State itself as its central antagonist and is engaged in a direct existential conflict with it."

Now, to be fair, Jordan's chief points were about communications flaws in the blue side's messaging, that might have made members of the "red religion" and "Trump Insurgency" immune to hearing or seeing. Others who have critiqued flaws in Democratic/liberal messaging include the always-cogent George Lakoff, whose explanation for the election is most on-target. Still, right here and now, I am discussing some the underlying "givens" that Jordan and many others base their arguments upon. These givens -- like Deep State -- are powerful meme-bombs, in their own right.

For a very different take on the Deep State meme, see: "How the Trump regime was manufactured by a war inside the Deep State," by Nafeez Ahmed, who traces how Donald Trump's Goldman-Sachs-Bushite (Skull n' Bones) cabinet may be at war against other elements in Washington. Ahmed's detailed listing of administration appointees and their ties is unmatched.

(Note: The latest battle in the War on Science has shifted into high gear with administration efforts to muzzle science that make the Bushites seem subtle, by comparison. "Do we want America to mimic failed regimes of the past, where knowledge and science were suppressed to benefit a few or to funnel more profits into dying industries?")

Of course, there is an element of basic human psychology, here. We all have been trained - by Hollywood - to view ourselves as heroic and insightful rebels against some authoritarian elite. The meme - and I talk about this a lot - is called Suspicion of Authority (SoA) and we were all raised, suckling its core premise.

But which authority? If those on the left dread Big Brother arising from conniving oligarchs and faceless corporations, conservative Americans fret over different "controlling elites," ranging from snooty academics to faceless bureaucrats. Alas, both wings ignore the plain fact, that they share an underlying reflex that is especially American. A very well-founded fear that - yes - freedom does have enemies.

This reflex has been manipulated though. Today's "Red Religion" (to borrow Greenhall's term) lumps together as hate-targets every profession in U.S. society that deals in facts and knowledge. Their narrative is that these professions -- maligned for decades in right wing media, from science, teaching, economics, skilled labor and journalism to the civil service, law professionals, medical doctors and judges -- have colluded to create a truth-bending, Orwellian cabal! Yes, all the people who know stuff ... those whom you trust to cure your cancer, teach your kids, keep the electricity running, investigate corruption, ask questions, explore the laws of nature, invent better phones, catch criminals, deliver honest justice, make or inspect your cars... they are all conniving haters of freedom and truth! They are all your enemies.

And now, two of the last knowledge castes have been added -- members of the Intelligence Community (IC) and the U.S. Military Officer Corps (MOC).  See: Is Michael Flynn the first casualty of a 'deep state' coup? from Salon. 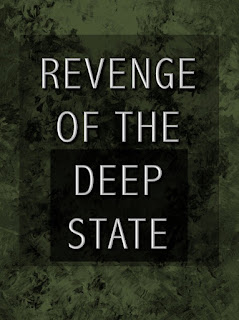 This Deep State - the story goes - has been responsible for both liberal tyranny and American decline from greatness.

Never mind that these same professions empowered the great burst of creativity and invention and entrepreneurial drive that multiplied our wealth a hundred fold, since the Second World War.

Never mind that every metric of U.S. national health improved, across the spans of both the Clinton and Obama Administrations, while nearly all such metrics plummeted across both Bush regimes. That only makes statistical "facts" the enemy.

Moreover, the lack of any significant foreign-planned Islamic Terrorism on U.S. soil can only be explained by conspiracy among roughly a million highly competitive journalists, cops, jurists and security experts who all magically agreed never to mention the true, bloody rampage.

Never mind that American lives were statistically safer, under President Obama, than at any other time in the history of the republic. Or that blue cities take in most of the refugees, yet blue citizens don’t feel in much danger.

Or that Iranians have harmed U.S. lives or interests far, far less than the graduates of Saudi-financed madrassas. So, why is almost every member of the Trump administration beating a drum for war (of some kind) with Tehran? Michael Flynn was a leading drummer. Indeed, if you want a more plausible “deep state” conspiracy theory, how about you start with the fact that no one in our military wants an Iranian War?

I'll admit, when you compare the different ways that Democratic and Republican presidents wage war, any sage officer would loathe the idea of a GOP commander-in-chief, ordering our troops into battle.

Articles like this one – denouncing the “Deep State” – are trial balloons that test possible justifications. Sales pitches to rally the confederacy. They set the stage for actions against all the knowledge castes, but especially security professionals. And more harbingers have blossomed in recent days.

“President Trump is considering tapping billionaire friend and New York financier Stephen A. Feinberg to lead a broad review of U.S. intelligence agencies…. The appointment of Feinberg would send shock waves through the intelligence community, a frequent target of Trump’s ire both as a candidate and as president,” reports The Washington Post.

“Feinberg rarely gives interviews and once said of private equity executives, “We try to hide religiously. If anyone at Cerberus has his picture in the paper and a picture of his apartment, we will do more than fire that person,” Feinberg told shareholders in 2007, according to Rolling Stone magazine. “We will kill him. The jail sentence will be worth it.”

Even allowing for polemical exaggeration, the zeitgeist here seems chilling. Now look up the word: “Cerberus.” Dang, these guys aren’t even trying to be subtle, anymore. 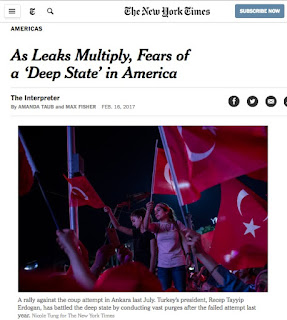 The trumpists and other murdochians know it will be dangerous to try pulling Erdogan-style purges of the IC and the MOC. Those officers whom they fire will make lovely recruits for the Democrats to run in Red congressional and assembly districts. (I'll speak more about this, later.)

Moreover those who remain will continue to be sources of leaks that (betrayal!) keep the public informed. And yet, what choice have the alt-righters, but to attack? Among all the despised fact-based professions, the IC and MOC are cadres who present the greatest obstacles to any oligarchic putsch. If forced to choose between the Chain of Command and their oaths to the Constitution, the People and the republic... a choice they desperately want to avoid... I put my money on their oaths.

Conservative by temperament, their resistance only drives home a key point that we all must remember: This civil war just isn't about "liberal-conservative" anymore.

It is now blatantly revealed to be what it's always been. Culture war between an anti-knowledge Confederacy and the forward-looking, scientific and progress-seeking Union that it periodically betrays, about once per generation. Jordan Greenhall uses "Blue Church" cleverly, but he and others know that is a way of using the blue-scientific side's own fears against it. The implicit insult is as inaccurate as it is unfair... as it is devilishly clever. Like the "deep state" meme.

We should have no energy crisis, now that Ronald Reagan has joined Barry Goldwater, William F. Buckley, Dwight Eisenhower and Teddy Roosevelt, all spinning in their graves. But Ronnie is whirling at 50,000 rpm.  Why?

There is another buzz term that you'll get to know, promulgated in this article. "Anti-Russian hysteria." The notion being that the Deep State is rife with mongerers trying to re-ignite the Cold War, or worse. This despite the fact that a U.S.-Iran War is both a top administration goal and lusciously desired by the Kremlin. (And, in truth, it is desired by the Iranian mullahs, who see it as a rationale to crush moderate-secular elements in Persian society.) This catch-phrase -- along with "Deep State" -- will spew forth.

(Oh, the richness of pleasure watching the silly confeds at CPAC waving little Russian flags with the word "Trump" on them!)

…And yet, I have to figure that the murdochians have gone too far, this time.

Do you remember what finally brought down the equivalent of Steve Bannon, back in during the 1950s heyday of the Greatest Generation? The sceeching firebrand Joe McCarthy? It was when he attacked the U.S. Military Officer Corps. But, weaned on stereotypes, movie clichés and pop-paranoid philosophers, I doubt that Bannon has a clue who he's leveling his lance against. The best-educated, most-pragmatically grownup and loyal clade of men and women in American life.

(You lefties, if you reflexively spit on these crewcut men and women, then you will be the fools. We need them, now, more than at any point in the last human lifetime.)

Moreover, whenever I think of those folks, I can sleep at night, and so should you, knowing that they are -- deep in their guts and bones -- on our side.