Post-election: picking up the pieces

Okay, back to a general post-mortem: let’s focus on the election itself, starting with two quick dismissals.  This was not about working class pain, or racism.

Yeah, yeah, I hear your howls. And sure, maybe a third of Trump voters have some justified sense of grievance over jobs. Unemployment dropped dramatically under Obama and his near-record departing-popularity reflects this. But changes in the U.S. industrial landscape have resulted in fewer workers getting the high-class and highly-paid manufacturing billets their dads had. Sure, automation is far more to blame than outsourcing, and Republican oligarchs did far more to outsource than democrats. Still, there’s real pain there. Clinton should have addressed it better… 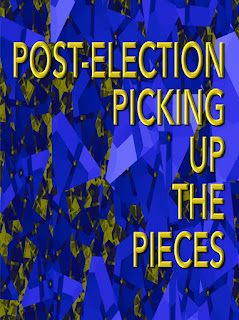 …and yet, less than a third of Trump voters were even remotely in that category. The rest are doing fine, economically. Many of them even know, grudgingly, that Democrats manage the economy better than Republicans do. Always.

No, their rage was cultural and psychological, not economic.

The same holds for racism. Yes, sure, it plays a role! And I hate it. And we need to fight it. And sure, maybe a third of Trump voters are affected by that poison. And many of the rest suffer from the new version -- lazy racism -- that has replaced much of the overt kind. White people who sit back, envision the scores of black and latino personalities they like, and the biracial couples they enjoy on TV, and conclude that means racism doesn’t apply to them. It gives them excuse to shrug and declare “racism is dead!” With the real, underlying complaint: “stop nagging me!”
Look, I accept all of that and again declare that we must fight it, as we fought, earlier, more overt forms of this disease. And we need to accelerate the trend that already began under Obama, of bringing manufacturing home. But let’s be clear… neither of these explanations for Trumpism correlate with all Trump voters.

I believe I know a better correlation. One that has an almost 100% overlap. But let’s hear from some others, first.

Why Rural America Voted for Trump: Robert Leonard, a New York Times reporter who grew up in rural Iowa offers perspective on the cultural divide between red and blue counties in the United States:

“Political analysts have talked about how ignorance, racism, sexism, nationalism, Islamophobia, economic disenfranchisement and the decline of the middle class contributed to the popularity of Mr. Trump in rural America. But this misses the deeper cultural factors that shape the thinking of the conservatives who live here.”

This piece is flawed, missing several crucial aspects of “culture war,” such as the growling resentment that’s been spurred against all professions of knowledge. But some of the narratives that confederates tell each other do go back a long way, even to pre Civil War times, and we need to listen – in order to refute.

He quotes one Baptist minister: “The difference between Republicans and Democrats is that Republicans believe people are fundamentally bad, while Democrats see people as fundamentally good,” said Mr. Watts, who was in the area to campaign for Senator Rand Paul. “We are born bad,” he said and added that children did not need to be taught to behave badly — they are born knowing how to do that. We teach them how to be good,” he said. “We become good by being reborn — born again.” He continued: “Democrats believe that we are born good, that we create God, not that he created us. If we are our own God, as the Democrats say, then we need to look at something else to blame when things go wrong — not us.” 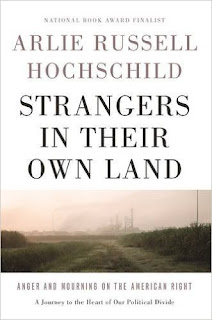 This drivel is an example of the many narratives that are used, to justify a hate that boils and overwhelms any attempt at negotiation or conversation.  Nor are facts - such as pragmatic outcomes - able to penetrate. If we subtract outliers like Utah and Detroit and Chicago, name a metric of moral and healthy living that is not worse in Red America, from teen sex, STD and pregnancy rates to obesity, dropouts, divorce and domestic violence, gambling and so on. Name... one... exception. Other than abortion which is a disagreement over fundamentals. See also: Strangers in their Own Land: Anger and Mourning on the American Right, by Arlie Russell Hochschild.

The NYT report implies that vast sums of money flow from red to blue America, when in fact it is largely the other way around. Indeed, as my family watches Bryan Cranston’s riveting depiction of LBJ, in “All The Way,” I am reminded of images from the America I knew, back when Trumpists claim America was great, when the South and Appalachia were synonymous with grinding, hillbilly poverty. Images that should embarrass those now screaming that “government never does any good.”

No, the source of Red America’s trauma runs deeper.

What hurts is the annual brain drain. The fact that every June, at the local high school - the center of all life in rural towns - the brightest kids weep and hug and swear to keep in touch… then scoot as fast as they can to the universities and bright cities that thereupon, at a deep, psychic level, become associated with blandishment and the stealing of hope. The stealing of your children. But we’ll get back to that

Another claim is that the problem is generational. If only America could return to the 1950s again. The romantic personality is always drawn to wistful homesickness for a past that never was. See How nostalgia for white Christian America drove so many Americans to vote for Trump by Sarah Pulliam Bailey in The Washington Post.

These romantic yearnings for a fabled fifties are insidious and it is vital to answer them. You’ll make little progress by talking about the racism and sexism of that period, not when some of these folks yearn for an era when everyone knew his or her place.  What you can do is tear to shreds their every assertion, as I did in my posting: Was 1957 America Better Than Today?

Even better, point out that the Greatest Generation of that era voted for high taxes on the rich, joined strong unions, and adored, above all living humans, Franklin Delano Roosevelt.

Earlier I mentioned the brilliant master of language, George Lakoff, who tried to tell the Clinton campaign they were combatting Trump in all the wrong ways.

“The Clinton campaign decided that the best way to defeat Trump was to use his own words against him. So they showed these clips of Trump saying outrageous things. Now what Trump was doing in those clips was saying out loud things that upset liberals, and that’s exactly what his followers liked about him. So of course they were showing what actually was helping Trump with his supporters. 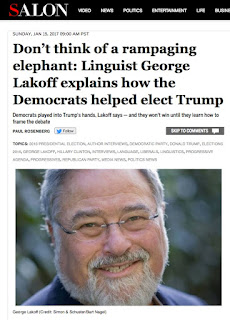 Lakoff continues: “All progressives and liberals have a moral worldview, what I described as the nurturant-parent worldview. (But despite his many anti hispanic statements,) many Latinos voted for Trump. Why? Because “strict father” morality is big in Latino culture. The campaign was not looking at values. They were looking at demographics, and they missed the role of values.”

Lakoff urged liberals to sell the notion that the “father” such voters need is the one composed of our common will, in fairly negotiated government, not a strongman caudillo, like Bush or Trump.  It is more abstract, but it could be sold, if Democrats would only try.  That would mean actually standing up for science and journalism and all the other knowledge professions. And yes, even the civil service.

Another psychological factor should be obvious, from the core character trait of the man these folks elected president. Pride is indeed key, and it takes a weird form, in Red America. Watch some of the riffs of the "Redneck Comedy Tour"… later re-named “Blue Collar Comedy Tour.” Seriously, rent some of the videos, in order to better understand. The humor is excellent! Endearingly self-effacing and self-mocking... only…

Only, after a while you realize, with a shiver, that all the self effacing jokes amount to a form of bragging. There's an implication, underlying every jest about good-ol' boy dumbness, that their fervidly passionate simplicity is more genuine, and "real," and vastly preferable over being a smartass college boy.

Indeed, I assert that this is what won Trump the election.  And I’ll explain next time.

== We coulda used a bit more Luther, or rather Lyndon ==

While we’re thinking about the most under-rated president of the 20th Century... for those of you needing solace: watch Bryan Cranston's spectacular portrayal of LBJ in "All The Way." If he doesn't get an Oscar, there's no justice. 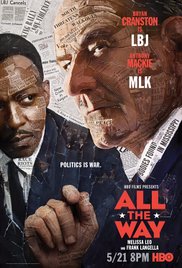 For decades I have fumed that no one would tell the story of Lyndon Johnson and all he did for our nation, refuting pathetically vile depictions by the likes of Oliver Stone. LBJ's loyalty to JFK's dreams was carried out with dispatch, passion -- and yes the ruthless political cunning this film so accurately showed. If you are shuddering over today's transition, imagine the majority of parallel worlds without the combination of JFK's assassination and LBJ's relentless push, where the 1964 Civil Rights Bill and the '65 Voting Rights Act did not happen. The flames that would have consumed us, as our souls would likely have deserved.

Sure, there are red states where those rights are undermined by foul tricks, like gerrymandering. Indeed, we could certainly have done even better. But the playing field shifted, because of Johnson, to a better and more fair nation. And but for Vietnam, he would have crushed Nixon in '68 and we'd all have been the wiser for it.

Oh, is there an award for casting? Seriously, I never saw an array of actors who so looked like their historical counterparts! I recognized Humphrey, Dirksen, McNamara, Hoover and so on, at first sight, and the Martin Luther King role (played by Anthony Mackie) was perfection! Alas, this is all the movie that Hubert Humphrey will ever get. But most of us don't get movies.

Maureen Dowd interviews Peter Thiel: "When I remark that President Obama had eight years without any ethical shadiness, Mr. Thiel flips it, nothing: “But there’s a point where no corruption can be a bad thing. It can mean that things are too boring.”

Want irony? I kinda agree. I do wish Barack Obama had been slightly more like LBJ, with just a tad better instincts for the jugular and political knife fighting. His relentless attempts to negotiate with a cult whose central code — the Hastert Rule — was and remains to never, ever negotiate with Democrats, even for the good of the nation, seemed foolish and kinda pathetic after a while…

…though endearing, as the Democrats provided us with two 8-year presidencies that saw not a single administration high official convicted or even indicted for malfeasance of office. Dig that.  not one. Only the first and second times that happened in U.S. history.

That utter proof of honesty, combined with the utter fruitlessness of a 24 year, half-billion dollar endless search for something to pin on the Clintons, ought to affect any rational mind, especially in comparison to the endless lists of calumnies and crimes committed by both Bush regimes and (even before entering office) by the Trump Administration.

Oh, but the cult is immune to facts or irony.

Here’s a test: any GOP lurkers out there, can you name one of the apocalyptic predictions about president Obama that came true? That even got broached or proposed by him? DHS internment camps? UN black helicopters? Swarms of henchmen confiscating guns? Forced abortions?

What none? Zero? And there's no embarrassment over there? None at all?

This is culture war. And the Confederacy is ahead. But Mine Eyes Have Seen the Glory….