“Spoils” and Trump's worst sin, spitting on the defeated.

Amid this Twilight Zone episode we’re living through, what’s my personal grievance? I had hoped by now to swing my attention fully back to writing science fiction, rather than living it.

Oh, there were chillingly accurate SF’nal forecasts. Not Orwell (not yet.) But I’ve mentioned Robert Heinlein’s prophesy of America enduring “crazy years” and a fundamentalist tyrant “Nehemiah Scudder.” Even more depressingly apropos is Ray Bradbury’s “The Sound of Thunder.” Watch a short film version here. ‪ 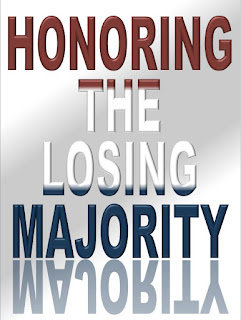 Some have sent emails commenting on how my “Holnists” in The Postman resonate with the burgeoning alt-right. Others ask: is this the end of Pax Americana, when a foreign power controls one - and possibly all three branches - of U.S. government?  Further - some ask – what about my conjecture that centuries only start exhibiting their main ‘theme’ a decade and a half in? Oh, please, let 2016 not represent this century’s theme.

But my “classic” getting the most attention - “Honoring the Losing Majority” - asked a simple question:

When a competitor or candidate wins on a technicality. Does he owe any consideration to the majority who voted against him?

That 2004 essay reads bizarrely apropos for today, including ruminations on the Electoral College. Swap a few words - “Trump” and “Bannon” for “Rove” and “Bush” - and the syndrome looks chillingly familiar.

But let’s start by reprising what I suggested that a mature and honorable person might do, if he or she won office, over the objections of a majority – or even a large minority. Imagine such a President Elect making the following pledge:

"I promise to ask my honorable opponent to pick a panel of Americans who will have control over my appointment calendar one afternoon per month. And I expect my opponent to serve on that panel. On that afternoon, I shall meet with -- and listen to -- any individuals or delegations that panel may choose. Millions of Americans will then know that I do not live in a tower of ideological isolation. I will answer questions and hear dissenting points of view."
Such a pledge should hold, even if you win by a landslide! It would cost a candidate or president little to give this much to the losing 40%. (Or today’s nearly 60%) There’s no obligation to act on what the delegations say, only to be accessible, listening occasionally to more than one ideology. More than one brain trust of cloned advisors.
Indeed, the legitimacy of any administration will be enhanced if we see the president receive articulate, passionate emissaries, representing diverse opinions and walks of life. So. If that is clearly what a mature and honorable leader would do, what are the prospects of this coming true?
== Pretty much zero ==

Clearly, Donald Trump’s answer is a loud and angry “no!” To the victor go the spoils of conquest: spolia opima — an ancient doctrine of ruthlessly finishing off your opponents, seizing all their goods and treating them as enemies to be crushed, lest they ever rise again.

The so-called Spoils System outraged Americans in the post Civil War era, till at last reformers instituted a protected Civil Service, safe from wild swings in the political caste. Then followed a century of consensus — that domestic peace and simple fairness call for the losing side to see its interests at least mentioned in the halls of power. Even if you won in a landslide, as Lyndon Johnson did, in 1964, and Ronald Reagan in 1984, you’re not supposed to rub the noses of 40% of American voters in their loss.

Hence, under Roosevelt, Kennedy, Johnson, Carter, Clinton and Obama, the Secretaries of Commerce were businessmen and women. Entrepreneurial programs were staffed with entrepreneurial people and the Small Business Administration by small businessfolk. Agriculture Department heads have generally spent a lifetime helping farmers. The Council of Economic Advisers had samplings of all doctrines. Under Eisenhower and (yes) Nixon, the Labor Secretary was a union member — even if accused by the left of being a tepid compromiser. The head of the Environmental Protection Agency (founded by Nixon) was someone who cared about the environment, and science agencies were headed by reputable scientists.

This reversed a bit under Reagan, especially re: the EPA. But it was both Bushes who began savaging the principle, for example appointing to run the IRS and SEC folks specifically charged with undermining the auditing of banks, Wall Street firms and the rich. Saudi influence was masked by State Department and intelligence officials, and so on. This would have been bad enough, if George W. Bush, hadn’t won office, in 2000, under questionable circumstances, clearly opposed by a majority of those who voted.  I wrote “Honoring the Losing Majority” at that point, in protest to immature and dishonorable behavior.

Still, Bush at least spoke a few words about consensus and accommodation, appointing cabinet officials who gave some appearance of professionalism, before proceeding to violate the principle. His enemies-lists were discreet and he did not dare to threaten (as DT has) the Civil Service, universities and the Officer Corps. (Eventualities that have stunned even the Drudge Report.) While he lied incessantly, for the most part, W did not screech and howl. 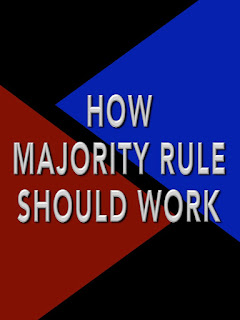 That principle - of showing at least some respect for the losing minority - should be part of any decent society. And not just in the Executive Branch.  Among the many “reform suggestions” I’ve proposed – fruitlessly - over the years, was for the majority in Congress to give the minority party a fair number of their own, discretionary subpoenas and the ability to call some days of hearings. (You in today's majority will want this power someday, when you drop into the minority again.) But one thing at a time.

How urgent is the principle today, when technicalities (like the distribution of electoral votes, foreign meddling and a high likelihood of “rigging”) have just disenfranchised not a minority, or a small majority, as in Gore-Bush 2000, but a very large majority of voters? Would not an adult - even a partisan one - want to offer olive branches, like my once-a-month meeting agenda, or possibly even granting the loser some say in cabinet picks?

Not, apparently, Donald Trump, whose thin-skinned vengeance fetishism has combined with almost slavish currying of favor by the ruling axis of power on the right. From the Koch/Murdoch/Adelson/Goldman oligarchy to the Russo-Saudi oilocracy, Trump’s cabinet choices show none of the populist autonomy that his braggadocio seemed to portend. Except for appointing the former head of World Wrestling — something that was pure, refreshing and his old self. The Kochs and Putin had no role in that one, I betcha. Nor did they command the most delicious of last week's theatricals -- the utter public humiliation, over frogs legs, of Mitt Romney.

If Democrats understood judo, they’d go limp, right now, and let Trump’s opposition come from the Bushite faction. The man is volcanically reactive! So long as the loudest enmity comes from his left, he will reflexively scuttle right.

But we aren’t here today to dissect this fellow’s personal or psychological motives.  The topic is “Honoring the Losing Majority.” And it is a sad commentary on our times that few have even raised the subject.

Go give the original essay a look. Swap a few names and words.  Then ask yourself: “Are liberals so much better?" Sure, they have on their side all the scientists and folks who actually know stuff.  And soon - if Trump proceeds on-trajectory - nearly all members of the intelligence and law communities, as well as most of the United States military Officer Corps.  Yet, have you seen any fresh ideas from the Democratic establishment?

The dullard-insipidly unimaginative campaign run by Hillary Clinton’s people - along with the generally clueless reactions by most liberal pundits - reveals just how desperately the Union needs to rediscover agility, just as it had to do in the 1860s, when faced by an all-too similar confederacy, aiming to re-institute feudalism.