Can We Save Freedom by Hiding?

Across all my years as an impudent dissenter from mob-think regarding freedom and privacy, one fact has left me boggled, time and again. The way activists and academics and pundits – many of them clearly intelligent and sincere thinkers – leap to make the same mistake, over and over again.  The error of technological myopia. 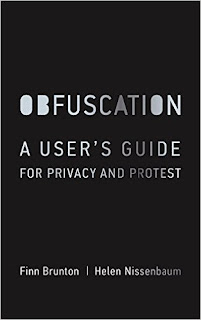 Take this example: “…New York University professors Helen Nissenbaum and Finn Brunton have a proposal. In their new book, Obfuscation: A User’s Guide for Privacy and Protest, they advocate taking evasive action, or what they call obfuscation. They define obfuscation as “the deliberate addition of ambiguous, confusing, or misleading information to interfere with surveillance and data collection,” and they see its potential as a means of redress. For example, they discuss software that generates misleading Google queries (so the tech giant can’t get a read on you) to Tor relays, which hide IP addresses.

Think of it as creating a diversion, or planting false footprints. Security expert Bruce Schneier has made similar suggestions—like searching for random people on Facebook, or using a friend’s frequent-shopper card at the grocery store. If you can distort the government’s or companies’ profiles of you, you’ve scored a small victory.” 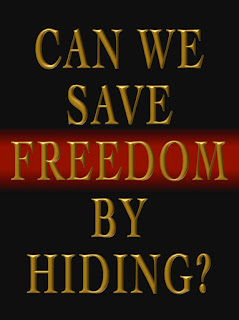 Hmm… a very, very small and utterly meaningless victory.  Science Fiction author Vernor Vinge referred to this approach in a novel, portraying a group that filled the Internet with machine-generated garbage information in order to mask personal information beneath a deluge of misleading fabrications.  The “Friends of Privacy” thus enabled their own members to conceal their online activities – or so they thought – while making the Net and Web effectively useless at providing reliable information to anyone, anywhere. A classic case of spoiling the commons, in order to achieve a narrow, self-serving goal.  (I portray would-be terrorists doing the same thing, in Existence.)

Over the long run, Vernor reveals the obvious – that the 'Friends of Privacy' are no more than a front for powerful interests, from oligarchs to criminal gangs, seeking to conceal their nefarious activities from any chance of discovery. Indeed, pick any method of concealment or obfuscation – won’t elites use it more effectively (by far) than commonfolk? In fact, won’t the very programs that you and I purchase, to muddy our footprints, actually report every datum to the original creators of the software?  And if you doubt that, oh, have I a bridge to sell you. 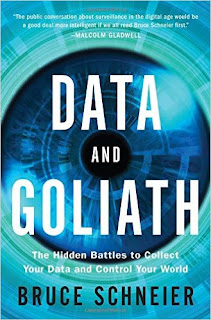 Technological myopia comes in where we see privacy mavens like Nissenbaum and Brunton and especially Security expert Bruce Schneier always talking as if this year’s technology is the ne plus ultra, the final act, the static object on the table for discussion.  Moore’s Law brought us here, but has no further relevance. Of course, this is plain lunacy!  Take the example of cameras.

Cameras are getting smaller, faster, better, cheaper and more mobile at a rate far faster than Moore's Law.  (Some call this "Brin's Corollary.")  And yet, nearly every discussion of surveillance assumes that they will remain great big, visible boxes on lamp posts. They won’t. They will shrink and move and zoom and become more numerous than blades of grass. Shall we banish them? How, when they become smaller than mosquitos and more numerous?

(For a glimpse of what that near future may be like, hear me read Chapter 3 of Existence.  And lower down, see "The Smartest Mob" and "Shelter of Tradition."  All three sections show how inevitably the tsunami of cameras will change everything.)

Perhaps common citizens will obey such a ban, but elites?  Name for me one time in all of the history of our species, when top elites have allowed themselves to be blinded.

In fact, there is every sign that a proliferation of cameras may be exactly what’s needed, in order to preserve freedom.  For example, take events in just the last year. For the first time, in the U.S., all police forces, even corrupt ones, must be careful in the way they treat minority groups. Why?  Because of the very same technologies that hand-wringers loathe. Elitist snobs in academia may ignore the effects that cell-cams are having on the street-level.  But real-life minorities and poor folks cannot afford to ignore good news. 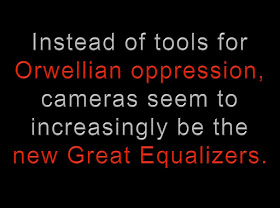 Instead of tools for Orwellian oppression, cameras seem to increasingly be the new Great Equalizers. Would the privacy mavens backtrack this trend?  Confiscate and eliminate the cell phone cameras that are finally giving minorities and the poor a real chance at street justice?  I can just hear their reaction. "Oh, in THAT case, sure, I'll allow that.  But nothing more!"

Except that in a couple of years, the cell phone cam will be a jewel on your lapel.  Shall we ban that?  Then a tiny dot on the corner of your glasses, or a drone the size of a bug that follows you everywhere, telling you what lies around the next street corner, ensuring that no one can harm you unrecorded and telling you if you are being followed.

Shall we ban that? Okay. Then exactly how will you accomplish it?

Oh but the next response is “I wasn’t talking about cameras but information! On my purchases and so on. Surely I can obfuscate all that!”

Um, wrong in a dozen ways.  First, if we enter an age of unreliable information online, that will extend to falsified images and cameras, too, will become useless.

Furthermore, elites will have all sorts of tools to defeat obfuscation.  Linguistic-semantic analysis will detect your statements and ID you, even hidden by a pseudonym. Comparison of multi-path inputs will parse truth from fabulation. Governments and criminals and aristocrats will have means to bypass the bits, eavesdropping on the sonic data as your voice vibrates your window, or they’ll tap and log the strokes you type on your keyboard, from the different sounds each letter emits. On the street, the very vibrations of your eardrum will denote you distinctly from the crowd surrounding you. 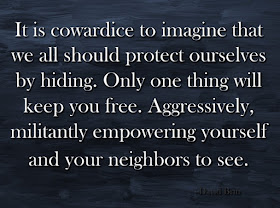 I do not say this out of despair!  Rather, in order to rouse you to fight for freedom the only way that has ever worked.  The only way that can possibly work.  And the way that the mavens absolutely refuse to consider.  In their relentless preaching for cowardice… that we all should protect ourselves by hiding… they perform the worst possible betrayal of everything that they claim to stand for.

Hiding will not work.  Sure, protect your passwords as a short term, practical matter.  But over the long term only one thing will keep you free.  Aggressively, militantly empowering yourself and your neighbors to see!

I tire of seemingly intelligent people who cannot lift their gaze to even notice what is happening right now, let alone look 5 years down the road.  We live in a narrow era of relative freedom and - yes - some desirable privacy.  We need to do what already works in order to maintain them. 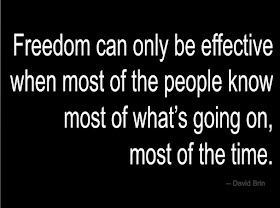 That means knowing that freedom comes first.  A free people can then demand some privacy, from elites and from each other.

But freedom comes first.  And freedom can only be effective when most of the people know most of what's going on, most of the time.