I’m a sucker for a challenge. I’ve done stories that were precisely 250 words. And precisely six words long. (One of those 6-worders had three separate scenes, action, conversation and pathos!) Heck, I’ve even written in second-person, future tense, though that one is problematic, because some readers obey.

Now comes a silly-ass dare from that meme-wallow, the Internet. GISHWHES (pompously promoting: the Greatest International Scavenger Hunt The World Has Ever Seen) is a charity fundraiser by Supernatural star Misha Collins. This year, one item on the list (#78) is a sci-fi story –140 words in length, or under - written specifically for the hunt. Alas, according to one source, “overwhelmed sci-fi authors aren’t too happy about it.”

That’s an exaggeration. Neil Gaiman replied to the request with an unnecessary snort, when silence would suffice. But Hugh Howey and others have given it a whirl. I put in an hour and came up with the little item that follows, below… now officially posted online for any scavenger hunter to use. 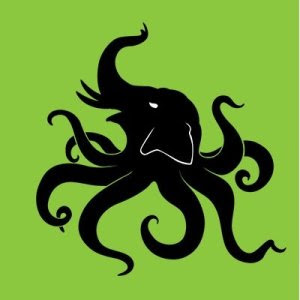 Oh, in 140 words or less you are supposed to mention Misha, the Queen of England, and an ELOPUS… a hybrid between an elephant and an octopus. (See image.) Which is doubly ironic, since in several stories I have already portrayed ELEPENTS, future-modified pachyderms, adapted for work in space, with crude gripping hands, a prehensile tail and a trunk for fine manipulation! I think my gene-mod-uplifted creatures are far more likely to come about than Elopusses! (E-lopi?)

But here we go. Misha… the (or rather “a”) queen… and a symbolic elephant-octopus. Yeesh. Despite these handicaps, I tried to pack in a lot of events, drama and back story. (Oh and I did it in exactly 140!)
NOTE: If any #GISHWHES team wants to claim this: it goes to the first to comment below. 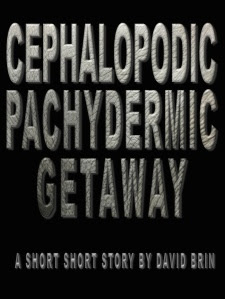 Many-handed. Nosy. Never forgets. A mythical creature of control, with busybody tentacles in every pie… or body cavity… on Earth.
On every palace doorway I pass -- Elopus emblems of a tyrant queen.
Disguised, I bring supper to Prince Misha – her heir, if ever she runs out of clones.
His ocean-gray eyes widen, then he nods.
“Set it by the window, girl.”
Since televising a call for freedom, he’s now a problem for the Elopus Monarch. Rebels arranged my mission, but I, too, have motives.
Spoon-touched, the custard swells, envelops him, permeating flesh too fast for surveillance to catch. A husk continues eating, while something slithers out between its legs, plopping to the floor. His homunculus.
“You’ll grow again,” I whisper, spreading diaphanous nightwings on the balcony. He coos. Even cuter now.
We soar. Alarms wail, too late.
Elope?
Us.

Sorry. The first posting of this left off the very last word of the story. It has now been fixed.

It's bizarre to imagine how our ancient compulsions will interact with future technologies - as if we don't do crazy enough things for love now!

us?
Can TeamOwnAndPumbaaLovesThisTeamRocks claim this story?

Well executed, David! In fact, this may actually be the form of the future. Not a great development when viewed by old guy English majors like me, but maybe not so for young people with up to date attention spans and insufficient interest in reading long form fiction. But thanks for this story, an mp3 that became a wav in my mind.

Shades of Silverberg's 'Nightwing' and Orson Scott Card's 'A Plague of Butterflies'.

The night wing reference is explicit. I never read the Card. got a link?

Going back to on-going topics, here's a new book you might find interesting: What's the Worst That Could Happen? A Rational Response to the Climate Change Debate.

You can see an except here (courtesy of friends at the National Center for Science Education): http://ncse.com/book-excerpt
Looks pretty good from the except.

A Plague of Butterflies, Orson Scott Card, AMAZING November 1981, can't find a pdf of it online, but its more fantasy than scifi.

As far as 'What's the Worst That Could Happen' goes, try googling the lyrics to 'There was an old lady who swallowed a fly' --- we all die, of course --- unless we refuse to swallow that particular pile of horse ____ !!

Hey Dr. Brin, remember when you were talking about the idiocy of Ayn Rand? Seems a businessman successfully proved that Ayn Randian Economics is a fraud. As in he destroyed Sears in his mad demented Randian dream. It's to the point that Rand Paul is starting to distance himself from Randian Economics.

Dang Robert, that guy is such a marroon.

Locum, that story was from before Scott Card was taken over by pod people from planet F$%$@! crazy. But that story gave hints of the crazy to come.

On the Ayn Rand-loving CEO...

The thing is, Ayn Rand was all about deregulation and worship of the job creators and all, but I don't think that philosophy about pitting the subordinates against each other and making them bow and scrape for resources is really in line with her philosophy.

If anything, he seems to be emulating that factory in Atlas Shurgged that John Galt escaped from, where the socialist management inflicted penalties on the productive and doled out privileges at personal whim. Those were the villains of Rand's piece, not the ones speaking with her voice.

Emulating the Starnes siblings because you are a believer in Ayn Rand's philosophy makes as much sense as me deciding to become a Holnist because I believe in the philosophy of David Brin.

The author labored mightily and brought forth a miserable pun.

(Wish I could remember this quote in Latin.)

I'm not a robot. But I don't have super-vision either!