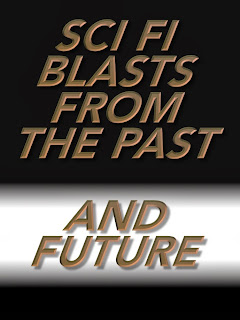 The biggest Sci Fi news is - of course - the release of the movie version of Orson Scott Card's ENDER'S GAME. As you might guess, I have plenty to say about Card's works, even without seeing how Hollywood has improved upon his archetype work.  But I will leave that for another time and venue. For now let me say that I hope Scott's movie does better than mine did!  I expect it will. It presses the right sequence of audience-flattering ("you are a demigod!") buttons.  Anyway, after a year of SF film flops, the genre could use a boost.

Still, I am leaning toward waiting for the DVD and holding a viewing party at our home, inviting friends who have also said they'll wait for DVD…. followed by lively discussion over copious drinks. Hey, DVD rentals are fair n' square. But decide for yourself. I'm just a patient guy.

Oh, by the way… On PolicyMic they recommend five sci fi series that ought to please folks who like Ender's Game.  I have mixed feelings, having written all the books in one of the recommended series and part of another….

Here Card addresses the controversy… and other voices weigh in. Here's Laura Miller on Salon. She's hostile partly for political reasons. (I care less reflexively about such things and am willing to suspend for the sake of story.)  But that doesn't make her points invalid. See a more nuanced opinion from Jonathan Rauch in The Atlantic.

Not exactly a big movie release… but I was in Tempe, Arizona to deliver the annual Shoemaker Lecture for Paul Davies's wonderful Beyond Center at Arizona State University, when some media folk associated with the new ASU Center for Science and the Imagination asked me to step outside (under the Phoenix Airport landing path) and answer "Five Burning Questions" on-camera.  The heavily edited sequence is not linear… but still holds together pretty well as I answer questions about the future, resilience and imagination.

Sometimes, one of my works inspires followup discussion that's worth a closer look. Steve Outing - on Media Distruptus - interrogates the vision of future journalism that I presented in Existence, with professional reporters empowered by vivid augmented reality (AR) but also by active links in real-time to thousands of stringers, volunteers, aficionados and witnesses, all over the planet, occasionally coalescing those networks into actively assertive "smart mobs."

Outing appraises the plausibility of the methods used by one of my characters - Tor Povlov - as she plunges through the world of 2045 in search of fast-breaking… and possibly world-shattering … stories.  An interesting analysis.

According to the august and erudite Colbert Report, as the wealthiest one percent prospers, a growing number of Americans resort to selling their body parts.  Watch this Colbert segment on the trend of Americans selling breastmilk, organs and the like. One reader recently wrote in to me about this report:

"I immediately thought of your delightfully unsettling short story “Piecework.” The whole time I was watching the segment I was thinking, “this is it, this is how it begins.”

"Piecework" truly is one of my creepiest stories and well worth 99 cents! (on Smashwords or Amazon)  Or try the even creepier and cooler (and somewhat similarly themed) "Dr. Pak's Preschool!" Both are found in my collection, Otherness.

I was asked to speculate on Ray Bradbury’s masterpiece, Fahrenheit 451, fifty years after publication: Well, it does seem quaint to imagine that knowledge of any kind could be burned away, now that electrons can be copied at a whim.  I have a device the size of my hand that contains all of Project Gutenberg and the text of Wikipedia. To eliminate all that would take a psychic tyranny.

But Ray's book is an allegory.  And it girded millions to defend literacy and free speech.  As a self-preventing prophecy it belongs to the ages.

Mike Resnick's magazine (mostly online) GALAXY'S EDGE fills a long-needed slot in science fiction... all reprints of terrific "classic" stories that you may never have come across.  This issue -- now available -- contains a lot of truly outtasight tales from decades past, with stories by Larry Niven, Kevin Anderson, Catherine Asaro, and Jack Dann... plus a modest contribution of my own. "Thor Meets Captain America" came in second for a Hugo and led to my graphic novel THE LIFE EATERS -- beautifully illustrated by Scott Hampton.

Have a look at Resnick's Galaxy's Edge!

soooo…. science proves that reading good literature helps to make you a better person.  All righty then, still I bet they left Sci Fi out of the study.  How about also expanding your horizons and learning great new things, experiencing new ideas….  And we do empathy, too!

A rebuttal -- though not a refutation -- of that "study" showing that literary fiction increases empathy. Neither side, alas, is doing science. So let's just keep reading.

A lovely list of sci fi films from the 1950s that were superior and well worth watching.  Yes, more than just FORBIDDEN PLANET!

Ah but for something more tongue in cheek, see Tiny Changes That Would Have Saved Terrible Movies.  I loved the proposed change to Star Wars Episode 1.  And… oh, right. Nice to see The Postman listed first… I think… though that's not the tiny change I would make. I'd have kept the actor, the screenwriter, even the director… for the first 2/3 of the film. But I'd have insisted the director actually talk - even once, over a beer - with the novel's author.  Good things might have happened to the last 1/3. Well, one can dream.

Ah, but, for laughs, here are some overly realistic versions of the pitches for famous sci fi films. Follow @HardSciFiMovies on Twitter. Among the better ones:

A scientist accidentally releases a biological agent which causes animals to evolve rapidly, over a few thousand generations.

A wealthy tycoon sponsors research into the cloning of extinct animals. Eventually a unique park is opened, populated by passenger pigeons.  Unexpected rampages occur that damage the paint of countless innocent cars.  (I added that last bit.)

In the post-apocalyptic future, a lone US Postal Carrier continues his rounds. He is arrested for breaching furlough.  (!!)

A talented computer hacker searching for truth is offered two pills by a mysterious character. It is a DEA sting operation.

A man walks into a police call box. It is slightly smaller on the inside. He places a call.

An archaeologist learns that Nazis are hunting a powerful religious relic. Content to let his enemies waste resources, he takes vacation.

A boy and his sister discover a space alien and provide him refuge in their home closet. Their parents correctly identify it as a groundhog.

Finally, in the latest issue of Nature, Andrew Jaffe takes a look at Time Travel in Science Fiction, from The Connecticut Yankee to Doctor Who -- has been now time traveling in his TARDIS for fifty years, first appearing in 1963. Scan this list of Time Travel stories dating back to Samuel Madden's 1733 Memoirs of the Twentieth Century, where a guardian angel travels to the 1700s carrying letters from the 1900s.

I don't know Dr. Brin...to me Ender's Game does not stick in my mind because it is about ubermenschen, but because it is about 1) very smart children in a land of adults who 2) are put into impossible situations for 3) the morally fraught justification of saving humanity. There is a lot of interest there.

That said, Card goes well off the rails later in the series, and I can't even read his most recent novels. But to me there is something special in Ender's Game that has nothing to do with winning a war and everything to do with what is done to do so.

'Ender's Game' (the book) is a genre-changer for a number of reasons:

It is anti-romantic in tone, stripping away the (institutionalized) illusion of childhood innocence; it is amoral in execution, concluding that the ends justify the means; and it is heroic in form but ignoble in finish, as if Asimov's 'Bill Starr' was cast in Golding's 'Lord of Flies'. It is also the least morally didactic of Card's work.

Locum, is it possible for something to stink as much as Avatar? I mean, that's a fairly low bar that's been set. I've heard people even claim that "Manus: The Hands of Fate" or whatever it was called is a better movie than Avatar. ;)

Re "Avatar", a week or two after it began showing in movie theaters, a friend called it "Apocalypse Now Dances with Wolves in Ferngully".

I thought I'd share this little story about Transparency and doing unto asshole protesters as are done unto them (but more politely). I do wonder how many of the bastard protesters freaked out when the tables were turned. Of course the 4chanesque trolls wouldn't care less but if it drives off even a portion of these assholes then it is a good thing.

On the transparency front, apparently Lavabit wasn't the super-secure email service that it promised... just like that one anonymous remailer you mentioned in "The Transparent Society." The only "security" a user could count on was the goodwill of the admins not to just look up their (plain text!) passwords and read emails to their hearts' content. Huh, funny how that works.

I keep sayin' it. Anyone who relies on ANY promise of shadows, excryption, secrecy, security for truly important things is a fool.

How many examples will it take?

As David says, the concept of Security & Privacy is a joke which presupposes the possession of either indifference, goodwill or honesty by others, all of which are in short supply according to the economic morality of supply & demand.

Your numerical pass codes & computer biometrics are analogous to the locks on your auto & home. Discouraging only the meek & submissive, they are easily broken or bypassed by the motivated, the authoritative anyone in 'a position of trust' & the merely curious.

Convincing ourselves that we are somehow rational, properly 'arranged' or 'enlightened', we ignore our darker & more chaotic impulses, invariably allowing them to rise up like the Id-based monsters from 'Forbidden Planet' or (even) the Baltic States against centralised Soviet authority.

Like Progress & Privacy, the concept of Security is a myth or 'a circular argument' that presumes an orderly periodicity in order to 'discover' order & regularity despite underlying disorder.