Another look at EARTH: 22 years later. Plus a Reader's Guide! 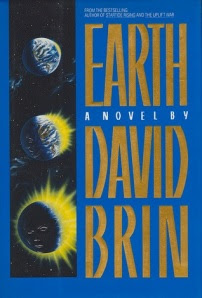 "Self-awareness is probably over-rated. A complex self-regulating system probably doesn't need it in order to be successful or even smart." --Earth

People who read Existence often compare it to my other big canvas near future novel, Earth -- published over twenty years ago (and recently re-released in the U.K.). Both books try to capture and portray a world that most of you just might come to live in. A world that has transformed in ways that are startlingly both good and bad... and yet has remained stubbornly the same in ways you'll find surprising, as well.

Such a mixture of amazement and frustration about progress is what many of us feel about this very time! I try to convey that inevitable near-future blend... but with a little extra science and science-based danger spiced in, both for thought and a lively plot. 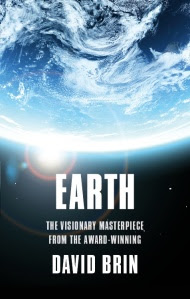 Earth was written at the end of the 1980s. Some 'predictions' that got  attention were my portrayal of a vivid, dynamic World Wide Web, wearable computing, Tru-Vu sousveillance goggles, as well as large-scale changes such as sea level rise and global warming. In fact, predictions registries have been set up at Technovelgy.com and Issuepedia to track hits and misses from Earth, such as bee zappers, reading plaques, filtered reality, and subvocal computer interfaces.

Earth takes a long-range view of Earth's past, as shown in this videotaped reading from the novel:

A Tale of the new-born Earth: 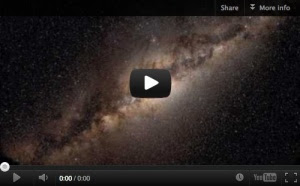 What follows is a new Reading Group discussion guide -- for the classroom or for groups seeking some fun questions to ponder. A downloadable PDF of this guide can also be found on my website.

--Do you consider Earth a realistic vision of our near future? Did you find it believable? What struck you in Earth about the way people speak, dress, travel and communicate? 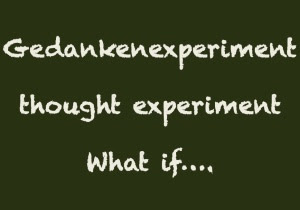 --Is the author trying to predict the way things truly will be … or to warn about things we should avoid? The term ‘gedankenexperiment’ refers to a thought experiment that explores possible consequences of our actions. Does that term fit Earth?

--Does Earth depict a utopic future, a dystopic warning…or a mix? Which of those three is most like real life?

--Think of other novels or movies, such as Dr. Strangelove, On the Beach, or Twelve Monkeys that warned about dire future scenarios. How does Earth compare to these stories?

--What cataclysms (man-made or natural) may have the capacity to change our planet’s future? What cataclysms in earth’s past had profound, extinction-level consequences? 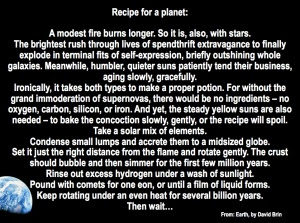 --Is the planet itself a character in the book? If so, have you seen this done anywhere else?
--The black hole in the earth might be viewed as the ultimate form of pollution from human arrogance. Is this the way the reader keeps viewing it as the plot develops?

--In New Zealand, Alex contemplates, “We all create monsters in our minds. The only important difference may be which of us let our monsters become real.” What do you think?

--Who are the real villains in the novel? What do they want? What empowers them?

--“Light is the scourge of evil.” What was the significance of the Helvetian War to end the “evils of secrecy”? How do Brin’s concepts of transparency and accountability echo in news today, particularly in the banking world? See also Brin's nonfiction, The Transparent Society: Will Technology Force us to choose between Privacy and Freedom?

--How have concepts of privacy changed under the “all intrusive eye of the Net?” In Earth, has technology (such as True-Vu goggles) empowered posses of elderly vigilantes – and oppressed the young? Did you find this surprising ordisturbing?

--How does Earth portray climate changes affecting earth’s ecosystems?
--Is some of the plot driven by good people who disagree?

--Two women strive to represent the planet. How do Jen and Daisy differ? Where do they overlap?

--What is the significance of that first biblical commandment, to Name the Beasts, to “observe God’s works, and glorify Him by giving names to all things”? How does this relate to science and the joy of discovery?  What was the importance of the Voyager spacecraft?

--Earth has been credited with accurately predicting some elements, such as wearable computing, Virtual Reality glasses, blogs, reading plaques (tablets), an early version of web pages, sea level rise, as well as global warming. Does that fact lend it credibility in your eyes?
--“A hallmark of sanity is the courage to face even unpleasant points of view.” 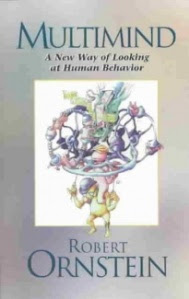 --Jen comments, “Each of us is many. Within every human, a cacophony of voices rages.” Neuroscientists speak of the “multimind” theory – that the human mind is composed of many small minds. Have you ever felt your brain function this way?

--U.S. coins read “E pluribus unum” -- From many, one. An “emergent” trait a complex system that is more than the sum of its parts. How does this relate to Jen’s ideas of consciousness?

--What is the role of intelligence on planet earth? Can the earth be likened to a living organism? Look up the Gaia Hypothesis. Why do some biologists take this notion seriously?
--The author notes, “Earth suggests that it is too late to choose a simple pastoral lifestyle for humanity…. that we must take up the challenge of being scientific and ethical managers of a vast planetary ecosystem.” Do you agree or disagree?

--Recall Jen’s conversation with Nelson. Are cooperation and competition really two sides of the same coin? How do these forces operate in both the natural and manmade world?

--Seek the common thread among the various definitions of a “singularity”: 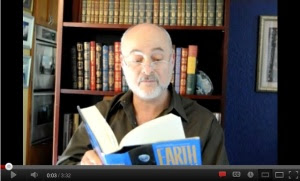 --“Change can’t be prevented, only guided.” How do the characters in Earth seek to guide change? How do leaders around the world today seek to do so?

--What do you foresee as the great innovation that will save mankind – or improve our future on planet earth?

--Did this novel affect how you view the literary genre called "science fiction"?

--Some fictional explorations take our own world and tweak just one thing to see what happens; as in all Michael Crichton tales. Others take you to a distant future, constrained only by physical law, when society may be transformed and we meet strange minds. Earth lies in the near-intermediate territory, showing a mostly familiar world undergoing a broad wavefront of changes. Which kind of idea exploration interests you more.

--Do you plan to read more of this kind of speculation about our near-intermediate future?

See the new page for Earth on my website.

There's also a Pretend to Be a Time Traveler Day on September 12, but December 8 is the original-and-still-valid date:

Thatis - it WAS the official date until 2114 when everything changed. Sigh.

I always thought Pretend to be a Time Traveller day was tomorrow.

RE future insights found in "Earth"...

While the Helvetian War may be presented in metaphorical terms (an invasion of Switzerland is a longshot)...

I no longer doubt its inevitability (though possibly but not necessarily a war of physical violence).

The only question is what form it takes.

At least that's my view... but it makes a good 'study question'!

needs to be considered, given the evidence that's been developing.

I know and have debated Ward.

While "Existence" has the advantage of an older, wiser, more experienced author, "Earth" still works better for me in terms of the plot and setting "grabbing" me. Not to take away from the later work, but "Earth" holds up quite well two decades later.

And just so everyone "here" knows, I haven't been "showing" my "face" as often for only one reason--my workplace has finally managed to adequately block the site (not Brin in particular, but all "personal" websites). So it's strictly off-hours for the forseeable future.

Pretend To Be a Time-Traveler Day will be celebrated last week, once we get it organized...

Excepting the teleological implications, Dr. Peter Ward is one smart dude. He is spot on with the assertion that different life forms deliberately poison their immediate environment in order to obtain competitive advantage.

This is how we obtain antibiotics. Our little friends the fungi secure their territory by producing chemicals to kill off & limit the competitive infringement of bacteria.

We also tend to forget that oxygen, produced by our "buddies" the plants,is actually an environmental toxin designed to disadvantage competitive plant species.

But it doesn't end there. More complex plant species tend to evolve chemical poisons specific to certain insect and/or animal predators, often trapping predator & prey into a cycle of dependency.

This principle could even explain the universal human compulsion to clear-cutting, monoculture & parking lots, environment changes that (unconsciously and/or deliberately?) disadvantage our designated predators or competitors.

Lions, wolves & bears can't spring at us from concealment (long grass, brush or forest) if there is no cover (concealment) for them to hide in. Which gives us the advantage.

At a stretch, it could even explain human participation in climate change because it (CC) will allow us to kill off our competitors in a much more efficient manner. After all, those polar bears are a lot easier to avoid & kill now that don't have anywhere to hide.

We may as well paint a target on their chests.


Locumranch: "deliberately" should be avoided. Also plants do not emit oxygen to poison neighbors. Oxygen is released in the creation of carbohydrates to store energy and the plants need to take it in again when then use the carb-energy to do other things.

We are capable of change in our perceived self-interest. Because we perceive.