Well, alas. here are some other items.

In the past two years, the Union of Concerned Scientists has collected the signatures of more than 8,000 scientists -- including 49 Nobel laureates, 63 National Medal of Science recipients and 171 members of the National Academies - who accuse the Administration of an unprecedented level of political intrusion into their world.

Of course most of you already caught this, but really, just in case somebody didn’t. Attorney General Gonzales’s testimony before the Judiciary Committee last Monday offered the following gem: "President Washington, President Lincoln, President Wilson, President Roosevelt have all authorized electronic surveillance on a far broader scale." ...um... and I used the word... “morons” to excess?

Oh, here’s a puff moment! I thank Stefan for finding this out: “George Deutsch, the political appointee put in charge of NASA public relations, who after a short career telling scientists to shut up if they knew what was good for them, recently had to resign... (and) The grad student blogger who uncovered Deutsch's fudged credential has Contrary Brin on his blog roll.”

And just when I was about to say “this isn’t doing any good...”

--
Oh, thanks , for citing the article about Bill Clinton.
It is vital that we remember one fact as the lefties who gave us Ralph Nader and Cindy Sheehan continue preaching their philosophy that the Democratic Party will win by “returning to its roots”... a political philosophy of always giving Karl Rove every provocation needed in order to stoke “Culture War.” That, all by itself, does not bother me. But to always choose the stupid fight over the fight that can be won? Let us recall that Bill Clinton not only won every fight. He won huge. Anybody who yammers that we need a different approach may be right... but they bear a burden of proof.

--
Finally... Some of you may have noticed that I’ve not dealt gently with Francis Fukuyama -- in some articles, for example, calling him a techno luddite and a neoconservitive “Bush Administration court intellectual.” (See: The Real Culture War: Defining the Background) A man of perception and ideas whose erudition has (alas) all-too often fallen short of its penetrating potential.

I wrote those words shortly before the 2004 election... even as Fukuyama was apparently commencing upon a process of soul-searching reevaluation. A process that - rather than being a sign of deplorable wishy-washyness - should be respected and given due credit. Indeed, it is the opposite trait, obstinate devotion to dogmatic consistency, that most threatens our pragmatic enlightenment in an era of rapid change. 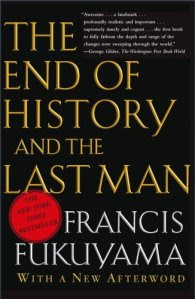 To see witness process in action - as Fukuyama wishes it to be seen - have a look at “After Neoconservatism” an article that appeared recently in the NY Times. wherein he worries about political and psychological effects of an Iraq intervention that has turned into a quagmire. Beyond the immediate costs, he sees the incompetent execution of an assertively “wilsonian” foreign policy (pursuing the utopian goals of “spreading democracy” and nation building) resulting in a revulsion, repudiation and rejection of wilsonian activism. Through their unnecessarily bellicose and divisive methodologies, the “idealistic” neoconservatives have undermined their very goals, creating an environment that has only encouraged both the left and right to drift backward, reverting to their more isolationist versions. He sees this as lamentable, at the very moment when a confident and assertive America may be key to making a better world.

While this conversion is welcome, indeed, a possible harbinger of the 1947-style mass-desertion by honest conservatives that I have long called for - a great awakening that could save a nation and civilization - I nevertheless despair when I see a bright fellow like this still clinging to straws. For example, his desperate need to claim that the debacle in Iraq is harming American assertive “wilsonian” confidence is clearly true. But to attribute this process of pain and discreditation to his former friends’ incompetence is - well - perhaps too reflexively forgiving.

I find it stunning how bifurcated the world seems to be, between those who reflexively seek conspiratorial explanations for strange events (e.g. Pearl Harbor and the Kennedy assassinations) and those “reasonable people” who reject conspiratorial explanations almost as a reflex. Yes, the former group includes a vast number of kooks and loonies. And parsimony demands that moderate and rational people (especially in a somewhat open society) adopt a first order attitude of “what you see is what you get.” I am especially caustic toward silly notions that FDR wanted us defeated at Pearl Harbor, and I find Lee Harvey Oswald totally credible as a lone gunman. 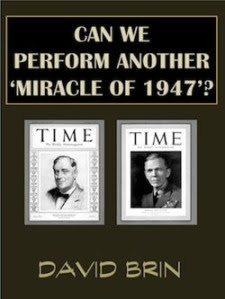 On the other hand, can “reasonable” men deny that history truly is rife with conspiracies? Moreover, when the parsimonious explanation of actual events is the conspiratorial one, should it be reflexively dismissed?

In the case of our recent behaviors in Iraq - where the sheer number of corrupt, inciting, and incompetent acts beggars the imagination - is it not at least worth contemplating that these events, that were authored by supposedly brilliant men, might actually have unfolded as planned?

Fukuyama complains that wilsonian-activist idealism is being discredited because it was poorly executed. But what if -- (please, just consider) -- what if that was the intention, all along?

Again and again, I keep urging that people ask this one question. “Who has benefitted from the recent sequence of events?” Is it possible that the beneficiaries of events might have intended to so benefit, all along? Is that not at least a simple hypothesis worth putting up alongside others?

There is too much in this, vastly too much, to comment upon further, right now. I must put this aside for later, when I’ll make a mini-essay out of it. Stay tuned for a more detailed discussion of such matters, using Francis Fukuyama as a centripetal focus.

For there are so many levels. Is there actually a chance that an intellect of the size and stature of Fukuyama’s might be weaned away from the blandishments and flattery of aristoklepts and the seduction of platonists, to find his home again among the likes of Franklin, Locke and Marshall? As I said, stay tuned.
Posted by David Brin at 3:09 PM

Email ThisBlogThis!Share to TwitterShare to FacebookShare to Pinterest
Labels: fukuyama