The Radical Notion Of Modernism

I've been rather suprised by the traffic generated by this blog... and a bit ashamed of neglecting it. But trying to keep my head above water and get back to writing novels.

So, what I think I'll do is use this space to try out - in serialized segments - my next article. It's on a topic very closely related to my articles about Tolkien and the Modern Age and Star Wars: The Dark Side. Only those dealt with romanticism vs enlightenment thinking in the arts and in storytelling.

The new piece is more general. It is about the whole notion called modernism, which is the natural outgrowth of Ben Franklin's wing of the Enlightenment. I'll post it here in small chunks. Comments are welcome. Especially examples or counter examples. (e.g. I cannot recall the name of the urban planner whose misguided "modernist" notions made such a mish mash of urban renewal in NYC in the 60s.)

The Radical Notion Of Modernism:

Is it relevant for the Twenty-First Century? 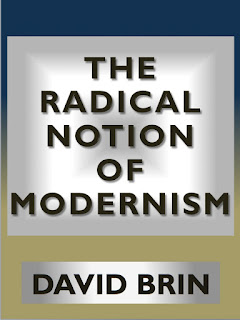 After 40 years in decline, modernism appears to be at a nadir, perhaps even suffering a fatal rout.

Even its supporters seem abjectly apologetic, that is, if you can find anyone who will admit using the word at all. The term is now largely associated with some outmoded and rather ugly architectural styles, far more than with its former meaning -- an over-arching dream of ambitiously making a better world through human creativity and will.

First, let me shrug aside “modernism” in the sense of an artistic or fancy intellectual movement. Grandiose theories serve largely to promote elitist snobbery and to undermine a worldview that is - at-heart - based upon gritty pragmatism.

Indeed, by anchoring the word to specific styles and decades, the opposing postmodernist movement has been able to call itself the rightful successor to something that is archaic, passe, even dead.

Modernism, to me, is about something much more fundamental than some trendy fads and formalisms. At its root, the movement has always been an expression of human confidence. 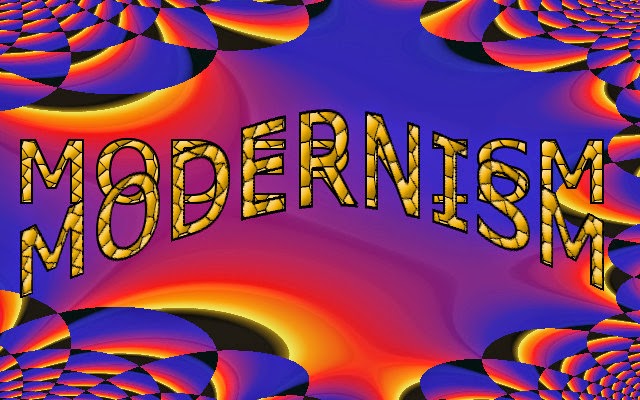 Confidence that rising knowledge, skill and creativity - propelled by both competition and cooperation - can empower each generation to confront a myriad challenges that their parents found daunting. A confidence that is easily ridiculed as either naive or arrogant, but that - in fact - grows out of the enthusiasm children often express, when they declare eagerness to “be something” when they grow up. To become something important. To do something meaningful.

This eagerness is all-too often punished by sneers on the playground, and later by dour scoffers in the world of adults. Nevertheless, it endures. Modernism is the grownup expression of our childhood dream to significantly change the world.

In all fairness, I want to be a modernist (think that I'll do better than my parents) but I haven't done better, I've done worse; that makes it a bit harder for me to believe.

I think you need to mention in your essay the man I consider the greatest modernist leader of all time; Dr. Martin Luther King. When he was killed it set back the modernist movement like nothing else has. We may have more advanced computers and communications but no one else has taken up his mantle of leadership to make the world a better place. Now most people don’t even realize he was a liberal and a progressive. Imagine what would have happened to the enlightenment if Ben Franklin had been killed when he was only 39 years old.

We have seen the power of non-violence in Yugoslavia and now the Ukraine. It needs to be linked with modernism again. In Ukraine it was the neo-cons using non-violence, proving that it is a weapon that works for strong, as well as the weak. And it only cost the USA 65 million compared to the half billion a day we are spending in IRAQ. Non-violent protest is the only way we will be able to change the laws which allowed for the vote rigging in Ohio and Florida.

"I think you need to mention in your essay the man I consider the greatest modernist leader of all time; Dr. Martin Luther King."

King is important for another reason as well- he sincerely believed that modern liberalism and Christianity were not only compatible, but complementary. He once said something to the effect that his family's weekly moral lessons come from two places- the pulpit and Star Trek.

The reason that Barak Obama became an overnight hero among liberals is that he gave a speech- and ran a campaign- that was permeated with this Christian Liberalism... to rudderless liberal protestants, he seemed, for a moment, to be MLK reincarnated. In a very (at least superficially) religious country, this is an idea that's not only beneficial, but essential. A recent study of the "13 tribes of American Politics" defined the "Christian Left" as being of roughly identical size to the "Christian Right"- just less vocal and considerably demoralized (in the sense of morale, not morals!) Having been raised among such people (it's the general alignment among the clergy and many parishoners of the ELCA), it's heartening to see that someone is actually recognizing that Christian doesn't have to equal right-wing and Republican, anti-modern or ultra-traditionalist.

The biggest problem, of course, is making sense of the abortion issue.

"The term is now largely associated with some outmoded and rather ugly architectural styles, far more than with its former meaning -- an over-arching dream of ambitiously making a better world through human creativity and will."

I think you'd find that not that many people have a problem with the "small modernism" of applying our creativity and good judgement to making small-scale changes that wind up improving everyone's lot. But many more have a problem with the "large modernism" which the term usually refers to - the modernism that says that a simple theory or idea, applied in a large-scale, top-down way, can "change the world" for the better. These top-down solutions bump up against the variability of local circumstances and the inevitable unintended consequences, and are resented by the people they are imposed on in the name of helping them. People have good reason to be suspicious of "large modernism" - it has produced spectacular failures that caused immense human misery.

As an example, compare the American and French revolutions. The American revolution in substance made small changes to the structure of society and involved people taking back certain privileges they once enjoyed but that had been curtailed by the distant British government. It worked out pretty well (assuming you weren't someone forced to flee to Canada). The French revolutionaries tried to totally remake French society, and wound up with blood up to their elbows.

maybe you need a different word? "modern" as you note means a specific period to most people (tied to architecture of that time, etc). Even the older sense of the word meant "nowadays when we know so much more" but not so much "the process by which we reach an even better future".

If it's really about the journey and not the destination, then maybe you want a word that doesn't refer to an endpoint. Something more like "progress". I know that word is already in usage ("progressive" is becoming a synonym for liberal), but it's less of a stretch to get from their meaning to your intent.

Question: is today's "progressive" tent big enough to admit some libertarian ideas? I think it could be. Watching the real presidential debates, it was amazing how many things Greens and Libertarians agreed on.

PS I just noticed in re-reading previous posts and comments, the word "progress" came up about as often as "modernity". I guess the point I was making is that since "progress" is apparently just as natural a choice in these circles, why pick the word with seemingly greater negative connotations for the general public?
--steve mcclure

What the heck happened to humanism or rationalism? These are your modernism. Has the demonization of secular humanism progressed so far that even we are afraid to use the term?

Glad to see that attention is being paid to the problem of modernity, and of the apparent impasse to which the West has come.

the urban planner whose misguided "modernist" notions made such a mish mash of urban renewal in NYC in the 60sLe Corbusier? Perhaps Robert Moses? (That was a bit earlier though...)