Modernism Part 3: the Era of Can-Do

THE BEGINNINGS OF THE CAN-DO ERA

I perceive several phases to this movement that might be called modernism, starting with the classic Enlightenment of the 18th Century, a time before romantics turned their backs on tomorrow, when you even saw a few characters like Thomas Jefferson, in whom romanticism and enlightenment seem quite joyfully mixed. 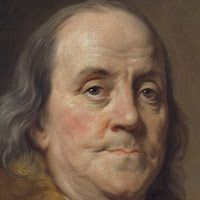 Of course, Benjamin Franklin was the archetypal modernist of that era, setting tone for the American wing of the Enlightenment. A tone of pragmatism combined with a deep suspicion of generalities and ideologies. A view that human beings are all self-deceivers and potential tyrants -- but that a system of living might be designed in order to maximize opportunities for our better natures to thrive, while minimizing opportunities for people to oppress each other. A notion that competition between human beings may be both moral and beneficial, so long as it is fair.

It seems a simple enough concept. Alas, as Pericles discovered much earlier, it is devilishly hard to implement in practice.

Ironically, the one who best appraised this era was a Frenchman, Alexis de Tocqueville. While the Enlightenment in France veered off-course, beguiled into a quasi-mystical belief in abstractions - in Platonist essences, logic and philosophical “reason” - de Tocqueville seemed thrilled by the no nonsense practicality of the Anglo-American Enlightenment, manifested in the US Constitution, and through town meetings that took place in vibrant little villages across the land.

(F.A. Hayek and Karl Popper both zeroed in on this rift within the Enlightenment. One wing - the “constructivist rationalism” of Rousseau, Hegel, Marx and postmodernism - hewed closely to Plato’s prescribed methodology, gathering pure but untestable declarations formulated by a self-chosen intellectual elite. In contrast, the “critical rationalist” tradition of Aristotle, Locke, Burke, Franklin, Kant, and de Tocqueville, emphasized falsifiable propositions and the accumulation of gritty practical knowledge in an environment of experimentation and reciprocal accountability.)

In this pragmatic approach lay the core belief of modernism, that humans are improvable. And if humans can improve, it means that even the finest ideologies, no matter how persuasive, are at best only approximations crafted by imperfect and confused ancestors. They should only be used as general suggestions, not as quasi religious tracts. Because the next generation of smarter, more knowing people will surely be better judges of what’s right and wrong than we are. (Indeed, why should they not also be more ethical and spiritually worthy?) And their children will be wiser still.

This is why the underlying pretext of modernism so deeply offends ideologues - of every stripe and persuasion. If our descendants do become vastly better people, then of what value is any particular static preaching? We have no business prescribing beliefs for such people, other than those core values that are most general, moral and useful.

If human beings are improvable, then our towering concern must be to improve them, by any means that is both decent and practical. Our children will then be far better equipped than we are to make their own decisions about (for example) balancing market and social forces, competition and cooperation, personal property and specifics of ethical behavior. Whenever a platonist (from Hegel to Marx to St. Paul to Leo Strauss) calls for purity of doctrine and faithfulness to essential Truth, the real claim is “I know better than our descendants ever will.”

The modernist call for incremental human improvement has taken many forms - some of them deeply spiritual (as in the case of anti-slavery abolitionism). Still, in America the core belief in human improvability stayed generally on course through the early days of the republic, while the promise seemed fulfilled as levels of health and education improved among average americans.

At the start of these pieces, I had some difficulty understanding what you meant by the terms 'modernism' and 'romanticism'. It is becoming more clear to me now, but I think a brief set of definitions (or link references, if you don't want to break the flow) at the start of the part 1 would help.

Also, beware of the 'ism' suffix (especially wrt 'modernism'). To me, it smacks of a belief system and, as you infer, such things tend to be mutually exclusive, insular and er... romantic?

Anyway, if I've got it right then modernist thought could be categorised as 'empowered brainstorming' and learning from the mistakes (eg NY architectural styles :-) whereas romanticism sticks conservatively (and all too comfortingly) to the 'tried and true'.
The hare and the tortoise*, if you will.
Both outlooks have their place; the trick being to decide which is best for a particular circumstance (go TJ!).

The term that conveys the most substance to me is Enlightenment (as explained in your literature essay), in part because of my background in German literature. I remember Lessing's essay on enlightenment as a one-page summary of everything that's important, and why! He was partly philosopher, partly playwright. The Renaissance man though is Goethe--his early works personify Romanticism, then through his long life he develops into a kind of Thomas Jefferson, with a wide range of vigorous interests. He synthesized Romantic and Enlightenment views; took enormous pleasure in science and incorporated it into his novels. Anyway the term Enlightenment to me symbolizes a throwing open of windows to let the sunlight in. I like the term but can see that it might be dated or arcane for your purposes.

Modernism is correct, but maybe doesn't quite convey enough of what you mean. It gives the image of tall buildings. In other words, maybe the word 'modernism' is a little old-fashioned!

I seem to remember that Goethe started using the word organic, among other plant-related terms, in describing human interactions. He thought that people were naturally inclined to grow, and that a 'gardener' with knowledgeable skills in pruning, etc. could get them growing/interacting in the most advantageous way. Perfectability which is accomplished thru organic means.

It seems like you need a term that incorporates 'modernism' with something that sounds less static, that implies some kind of growth potential in the word itself.

My favorite bit of writing:

-----
“… Whatever wisdom constituently is, it is like a seedless plant; it may be reared when it appears, but it cannot be voluntarily produced. There is always a sufficiency somewhere in the general mass of society for all purposes; but with respect to the parts of society, it is continually changing its place. It rises in one to-day, in another to-morrow, and has most probably visited in rotation every family of the earth, and again withdrawn.

” … by giving to genius a fair and universal chance; … by collecting wisdom from where it can be found.

“… As it is to the advantage of society that the whole of its faculties should be employed, the construction of government ought to be such as to bring forward, by a quiet and regular operation, all that extent of capacity which never fails to appear in revolutions.”
—————————————–

This is why there is yet no monument to Tom Paine in Washington DC. His is still a revolutionary voice today, still pointing beyond what we ever attained, saying do better.