"It's not who votes that counts but who counts the votes" -- Joseph Stalin.
Posted by David Brin at 1:43 PM 5 comments:

Just a note of thanks to Dana Blankenship for his flattering blog about my talk at the Accelerating Change conference at Stanford. Read a summary at: http://web.archive.org/web/20130729211341id_/http://itc.conversationsnetwork.org/shows/detail358.html

Brin's point here was, "We have to stop acting out of our own self-righteousness and recognize that we too may be subjects of propaganda." And finally, "Only in an open society can we charge into the future."

A few inaccuracies... but he and the rest of the audience at the Stanford University Conference on Accelerating Change seemed to "get it"... that we need to remain a civilization that looks ahead, with both skepticism and eagerness, toward a future of open horizons. Not one featuring a stage-set drama of the end-of-the-world. 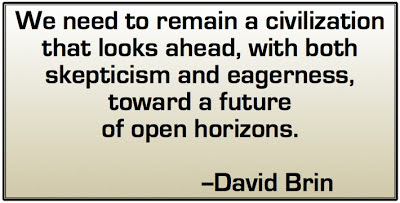 Persevere... Think outside the axis...

Especially to my 12 year old son, one of the deepest and most honorable souls I've been privileged to know. His rectitude and character were a gift to me that I, as a parent, never had to train. And alas, he deeply trusted my assurance that the Moderns would win over Apocalyptic Vision in this election. His pain was that of a precocious child who only knows intellectually that there will be other days.

My fault. My damned fault.

But it seemed so clear. Never before have so many of the intellectual elite abandoned a political party to call its leaders "morons". Several hundred prominent Republicans from William F. Buckley to George Will to (even) a wavering Pat Buchanan, publicly denounced the "neocons" as divisive, manipulative and crazy. Almost a hundred GOP-related newspapers spurned decades - even a century - of tradition by abandoning George W. Bush and his narrow cabal of kleptocrats, neocons and apocalypts.

In my own very-Republican, upper-middle-class neighborhood, not a Bush lawn sign could be seen. Kerry bumper stickers outnumbered Bush stickers ten to one. And nationwide polls showed signs of a huge turnout. This traditionally favored democrats.

In fact, these signs did not lie. Kerry won URBAN AMERICA by margins greater than Johnson over Goldwater in 64. In other words, my urgent, long-winded, detailed and carefully-reasoned essays (see: http://www.davidbrin.com/neoromantics.html) were aimed at helping a trend that was already huge and underway. Persuading people with post-graduate degrees... nearly all of whom were already persuaded.)

Who knew that the groundswell was even greater in Rural America? Karl Rove said - 4 years ago - "there are 4 million missing evangelicals; I'm going to get them." And he did. When I was a kid, pastors showed decorum and restraint. They used allegories to slip in subtle political hints from the pulpit. Now they threaten damnation if parishoners don't grab "I-never-voted" Bubba and drag him to the polls.

I will write mote about this phenomenon... the Divided States of America. But first, I recommend you all drop by:
http://www-personal.umich.edu/~mejn/election/
and ponder the maps showing how deep the divide is.

See also Godly and Worldly America by Simon Schama, in the Friday November 05 2004 issue of The Guardian.

In effect, Rural America has declared war on Urban America..... though of course they will say that this is only in their own defense. In defense of moral values that Urban America has put under assault for decades.

.... I'll post a big article about all this in a week, or two, or three. Depending on travel (I still have speeches scheduled) and my wife's insistence that I go back to writing stories that pay. But first, some reassurance:

This too will pass.

Please. History shows that America has survived similar waves of urgent nostalgia and romanticism -- like the Great Awakening and the Know Nothings. America is stronger than this brand of mania. We usually regain our confidence to face a future of relentless challenges, unafraid of the moral and technical challenges of change.

And with nuclear war temporarily off the burner - (can you think of a LESS frightening time to have maniacs near the Big Button?) - I think we can wait them out.

(W needed this war to get re-elected. My guess is that he'll taper it off fast, now that it's accomplished its paramount goal. That is, unless the Saudis insist we keep it going. The nightly footage on Al Arabiya serves their long rage goals.)

Yes, and even the US Supreme Court. Let's make our symbol the RICCOLA COUGH DROP sending crates of them to Democratic Senators, insisting that they filibuster through the night so that W appoints genuine jurists who are honest conservatives and strict constructionalists, rather than apocalypse fetishists who drip venom toward those who disagree. If the new appointees are strict constructionalists, then I feel that both liberals and conservatives will be in for a surprise.

(I'll talk about that later. It may help you all to cheer up. Well, those of you who read and think about the future as an extended vista, stretching far ahead....)

But one thing, just one, has me down and gloomy with despair. It will sound like a CONSERVATIVE thing. But it is something precious. Something we needed for peace and progress and a better world.

What is Dead is our dream of Pax Americana leadership in a uni-polar world. The very thing that those bright nincompoops, Wolfowitz and Pearle and Pipes and the other rationalizing Platonist Straussians THINK they are enhancing.

All over the world, meetings will intensify to forge a Eurasian alliance against our immaturity. This is HAPPENING right now. The neocons have driven Paris and Berlin and Beijing and Moscow into each others' arms. The meetings which HAD been vague and hypothetical will now get very pragmatic. Neocons shrug at this news and sneer at Eurasian impotence. But that immature and short-sighted sneering is proof of their underlying stupidity.

And meanwhile, we provide footage for Al Jazeera's successful recruitment drive to create the first Pan Islamic unification in a thousand years.

Francis Fukayama is part of the group ensuring that his END OF HISTORY book will become a joke. We are in for plenty of multipolar history ahead. Pax Americana has missed its chance.

Is that ironic? While the Liberals wring their hands over things that we can endure... we'll find other ways to help the poor and the environment... my deepest pain concerns something that the neocons think they are building for us all.

I mourn Pax Americana. It could have saved the world.
Posted by David Brin at 11:10 AM 17 comments: 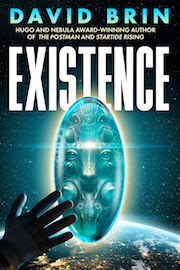 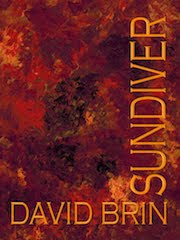