I've published my second and final "salvo" before the election.

The first one - "War in the 21st Century" http://www.davidbrin.com/neocons.html - focuses specifically on this election, meticulously showing how the Bush Administration has betrayed even those conservatives who support the concept of a potent Pax Ameicana. It includes a persuasive line-by-line comparison of the mature, nimble and successful Balkans Intervention to today's inane slugfest in Iraq.

(In the Balkans, not a single American was lost to hostile action. Prestige, alliances and especially preparedness were unaffected. In Iraq, our best combat units are mired in grinding attrition and our reserves are being used up while prestige plummets, dissipating readiness in dangerous times to sub-Pearl-Harbor levels.) 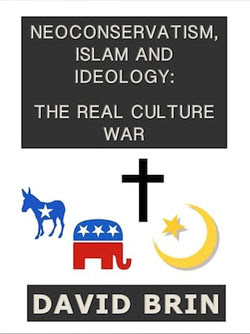 The NEW salvo - "Neoconservatism, Islam and Ideology:
The Real Culture War" http://www.davidbrin.com/neoromantics.html
- is less tied to the election. Looking beyond the election, it uncovers philosophical, ideological and psychological implications of the latest alliance calling itself "neoconservatism."

A weird alliance that would break apart if any of the component groups ever thought about their diametrically opposite visions of "the future." (In fairness, they aren't the only odd-couple bunching of ideologues, spanning left-to-right.)

Again, thoughts and comments are most welcome here at:
http://www.davidbrin.blogspot.com/

Thanks and here's praying for Western Civilization. db
Posted by David Brin at 8:04 PM

I am fairly new to your works of fiction, even as a voractious reader of SF, but I consider myself a longtime reader of your website, which, unitl now, has served as an unofficial blog. I wanted to express my gratitude for your centrist perspective, positive outlook, and level-headedness. You are a wonderful role-model.

I find the many essays in your website captivating, not because they struck me into an iconoclastic daze, but because they complimented my own thinking, but with such a wonderfully new perspectives on the familiar. You make rational, even-handed discourse fun to read, and I have recommended your essay Disputation Arenas to every person I've met online with an honest interest in understanding the purpose of political discourse.

I was quite suprised to find you taking such a strong position in these recent essays, but you have more than earned the right. You have proven your centrism and your fairness to the extent that anyone who charges you with bias is merely showing they haven't taken the time to explore your site. I was afraid to take a position on my own blog, but you have made me realize that I should have done so. These recent essays are just as thorough and plain-spoken as any you have written. Well done.

My one bit of advice as a fellow blogger: Please take care in responding to the "cranks" who post feedback to your blog. While readers like myself are very impressed with your thoughtful attempts to respond to them, we don't want you to suffer burnout trying to squeeze water from rock or open mindedness... from a rock. We are far more interested in what interesting essay Dr. Brin will write next. Thank you.

Hi David,
Could you use hypertext to refer to your articles? The standard blogger editor makes this v simple to do, and it makes life much easier for your readers (or, at least, those too lazy to cut and paste url :-).
eg:
"War in the 21st Century".
"Neoconservatism, Islam and Ideology: The Real Culture War"
(the last isn't available from your website, btw)

Thanks, both of you. I'll try to use html, as an old TwenCen fart like me can manage! Here's hoping good things happen... DB