More marvels from space -- starting with this UFO crap, then real wonders.

Okay, let's get the damned UFO stuff out of the way first.

No living human is better qualified to talk about alien life (I assert). I consult on innovative and advanced spacecraft design projects. I have spent almost 40 years as a leading investigator on SETI matters. My doctorate dealt with organic dust from comets, a possible source of 'panspermia.' Oh... and there's the science fiction, lots of that, constantly exploring concepts of 'otherness' - including a book by that title.  (See my new "Best of David Brin" collection!)

So when I call bullshite it is not from some stodgy unwillingness to imagine the unusual!  To the contrary, I have always found most (not all) UFO stuff to be shockingly unimaginative and dull.  I mean, look at purported UFO behavior! The universe is athrong with space-twerps?

Only now...  Omigosh!  The US Government now admits that there are sometimes reports and even blurry frootage of wildly veering and swerving "tictac" blobs! Not in any way saying it's aliens, but Unexplained Aerial Phenomena. Gosh-a-roony!

Okay, let's get my response-and-theory out of the way before we go on to real wonders of space! All this brouhaha (ha ha ha?) is blatantly over a freaking obvious cat laser.
Cripes, I've been quiet about it because the ones messing with Navy pilots and the rest of us may have had some reasons for some confidentiality. But this has gone too far and someone has to point out the obvious. Look up the words cat and laser on YouTube, and tell me you don't see it!
Here is just one example of how the US Navy itself has developed ways to create distracting blob spots in the open air. And this doesn't even use the far better, more compact and agile method that I know they know about. (I mean if *I* know it...)
OMG you'd rather believe in aliens with 'ships' that break every law of physics and optics in order to mess with us, all of it while maintaining 1950s levels of blurriness when there are MILLIONS of times as many cameras, now, than there were then?
The list of absurd claims goes on and on. One of them might make a good sci fi tale. TWO make a decent cult belief. But all parts of this outrageously dumb scenario?
Sure, aliens may be waving the cat laser! But other wielders are far more plausible.

“The most distant Solar System object, Farout, has lost its crown after just two years. As Inverse reports, astronomers have confirmed that the planetoid Farfarout is now the farthest known Solar System object. It's currently 132AU, or about 12.3 billion miles from the Sun (Farout is 'just' 120AU away), and its elongated orbit will take it 175AU away. For context, Pluto is 34AU from our host star...”

A nice talk by David Jewitt about the Asteroid Belt and what a large fraction of the half-million+ belt roids are sublimating water, suggesting they are more primitive carbonaceous chondrite types breaking up via thermal stress... though he also discusses exemplars of asteroid-like comets and at 48’ he lays out the theory that I first presented in my doctoral dissertation (1981).  I think he may have missed a few things.  But a truly enlightening talk.

Another truly wonderful Hubble image, this time from a star-forming nebula around 4,900 light-years away in the constellation of Gemini.

Farther out, but still in our ‘neighborhood.’ Fascinating article offers TWO amazing results from the EU's Gaia craft that tracks the parallax of over a billion of the Milky Way's closer (to us) stars. (1) An embedded video shows the projected paths of thousands of the nearest of these stars across our sky across then next few thousand years. Note longer-faster streaks will be close passages! (2) a corrugation spur of super-hot/big OB type blue giant stars will likely erupt with supernovae across the next million years or so and some of them maybe soon. And (3) YOU are a member of a civilization that does stuff like this.

Which is the greatest of those three wonders?

And did lightning start life on Earth, by releasing trapped phosphorus to help make a biosphere? Phosphorous is  the rarest ingredient in LIFE ™ And cheaply available Phosphorous is getting used up fast from North America’s once vast deposits, leaving the largest lodes in Morocco, Iraq and Iran. Lovely. (As depicted in my novel EXISTENCE.)

And there may be a lotta wattah left under the surface of Mahz.

Seeking life farther out… Panspermia is back, being discussed as astronomers catch up with science fiction. It is stylish now to discuss how our sun’s cometary Ooort Cloud likely brushes against the comet clouds of other stars, intermittently, exchanging (perhaps) bio-materials that way, as bacteria exchange plasmid DNA… and as Gregory Benford and I posited in the 1980s in HEART OF THE COMET.

And just prior to getting into singularities… Supergiant stars like AG Carinae are rare: less than 50 reside in our local group of neighboring galaxies garishly emitting a million times the output of our 70x less massive Sun and racing toward inevitable supernova oblivion. Kewl video.

== Singularities! We got your black holes here! ==

A stunning new animation from NASA shows the entrancing dance of two monster black holes in orbit around each other, each one’s titanic gravity warping the other’s “Thorne Thimble”… the unique way that a mammoth-hole’s glowing accretion disk appears to surround such monsters. (As first predicted by my friend, Caltech prof and Nobelist Kip Thorne, for the movie Interstellar.)

A single neutrino began its journey some 700 million years ago, around the time the first animals developed on Earth, when a doomed star came too close to the supermassive black hole at the center of its home galaxy and was ripped apart by the black hole's colossal gravity. That event was first detected by the Zwicky Transient Facility (ZTF) on Mount Palomar in California on 9 April 2019. Half a year later, on 1 October 2019 the IceCube neutrino detector at the South Pole registered an extremely energetic neutrino from the direction of the tidal disruption event. "It smashed into the Antarctic ice with a remarkable energy of more than 100 teraelectron volts..." and its path led straight back to that crushed star’s death throes. Wow. Ain’t we something?

The black hole at the center of this galaxy – in the latest amazing Hubble and radio-VLA mashup – is spewing million-light year jets. It's an elliptical galaxy that's roughly 1,000 times larger than our own Milky Way. Same goes for the black hole the galaxy formed around; it's also about 1,000 times larger than the one at the center of our Milky Way, at around 2.5 billion solar mass. (Many galaxies are believed to have formed around supermassive black holes.) "Emitting nearly a billion times more power in radio wavelengths than our Sun, the galaxy is one of the brightest extragalactic radio sources in the entire sky.” 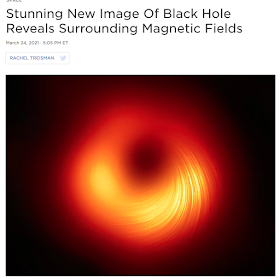 With this incredible, stunning image of a black hole - scientists have mapped using polarized light, the magnetic fields around a black hole at the center of galaxy Messier 87, which is located 55 million light-years away. Astronomers are still working to understand how jets larger than the galaxy itself are launched from the black hole within it, but these powerful magnetic fields have a lot to do with it.  (And my masters thesis slightly advanced the theory of polarized light passing through anisotropic media.). Just incredible. Look at this!  And know you are a member of a civilization that does stuff like this.

Even farther out, toward the edge! Astronomers had found about 50 of "quadruply imaged quasars," in which a foreground galaxy’s massive gravity has lens-warped the quaser’s image into four parts. (There are many more known with just doubled images.) The number of quads known has been grown by applying recent methods of machine learning. Among many uses would be checking on the two somewhat different estimates – local vs long range – for the expansion rate of the universe. “A quasar-based determination of Hubble's constant could indicate which of the two values is correct, or, perhaps more interestingly, could show that the constant lies somewhere between the locally determined and distant value, a possible sign of previously unknown physics.” Another use not mentioned is to see how the quasar’s four images change with time, since distance traveled varies!

Cosmologists are pressing rewind on the first instant after the Big Bang by simulating 4,000 versions of the universe on a massive supercomputer, all with slightly different initial density fluctuations. The researchers allowed these virtual universes to undergo their own virtual inflations and then applied a reconstruction method to check them.

And while we’re going cosmic… this paper asserts that the whole dark matter thing may be based on an oversimplification of the gravitational models of a rotating galaxy, leaving out general relativity effects or “gravito-magnetic” influences. The authors assert motion curves now fit without any need for a possibly mythical Dark Matter component.  Okay. Mind you that while I have my astrophysics union card -- a member of the priesthood, so to speak-- I am more of a Franciscan (I model orbits and spacecraft and comets and such… or did)… and this is real Jesuit stuff. Above my pay grade. Still….