Bait n' switch and distraction from the High Court. Don't be fooled.

One man... one man... has chosen to send us on the path to civil war. And I’m asking those of you with some attention span to closely follow the reasoning... or rather rationalization... applied by Chief Justice John Roberts for allowing continued electoral cheating that even he called blatant. His rationale: that Federal courts may not interfere in the sovereign power of state legislatures even if those legislatures were outrageously, unfairly and illegitimately chosen by cheating. Cheating that then warps future elections so that cheating always wins.

The Court has ruled that the people of such a state have no visible recourse to stop the cheating... not even by appealing to the Supreme Court of the United States of America.

This is one of those moments when your grandchildren will ask: "Where were you when you heard...?" It ranks up there with Pearl Harbor, the Kennedy assassination, 9/11... and especially the firing on Ft. Sumter. This could be the day when hope died that our institutions weren't fatally suborned, as they had been in the 1850s.

I knew it was coming, telegraphed in the oral hearings. It’s why I published my Minimal Overlap proposal which - unlike any other gerrymander-fix - is simple (three sentences), requires no complex "commissions," and grants state assemblies much of the leeway Roberts demanded... while decisively eliminating the fundamental injustice. (Yes, all that in three sentences. A senior federal appeals court judge called it interesting and plausible.)

But I'm not here today to rail against that predictable decision, when John Roberts chose to be remembered in history alongside Roger Taney, as we'll now slog our way out of confederate treason, one muddy, cheating-biased battle after another.

No, I want to point to other cases that supposedly show “balance,” as justices Roberts, Gorsuch, Kavanaugh and even Thomas play a subtle game, each of them siding with the liberals on one or another side matter, in order to proclaim: “See? I am not a pure dogmatist tool!”

Step back for the kind of perspective that (alas) you'll get nowhere else. 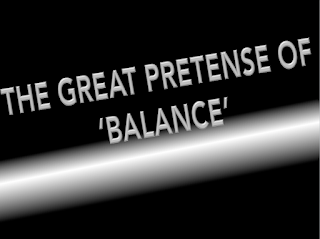 Distract from your real aim by attacking something the other side cares about that seemed already settled.
Hurt people, lots of people...
... then agree to stop if they’ll give you everything you wanted (and more) from the original negotiation.

This method served Trump well in the world of slumlords, casinos and shivving construction contractors. He tried it with DACA and putting kids in cages and screeching at our allies and so far the method has 100% failed him. That is, till it proved effective on the Roberts Court.

Having delivered on the only truly important matter - giving a free pass to gerrymander-cheating that will let the GOP retain power in 30 states even in the face of an anti-Trump electoral wave - Kavanaugh, Gorsuch, Roberts and even Thomas get to be ‘swing votes’ and appear ‘judicious’ and evenhanded in decisions that mattered very little… like reiterating the right of federal agencies to interpret ambiguous rules.

Or the silly uproar over citizenship questions on the census.
Oh, you fell for that one?
As if that distraction ever mattered, or would have made a big difference in census compliance?
Or could not have been countered with a vigorous outreach campaign?
Admit it, you fell for that one.
As for DACA, that too was always intended to be a threat, a nasty hurting of innocents, followed by “concession,” once they got the real thing they want.

Stop giving in to distractions! The gerrymandering decision was McConnell’s goal, top to bottom, for the last four years. It was everything. And now we must pick up the only tool for citizen sovereignty that remains, once the US Supreme Court betrays the people.

(Late addendum! Aaaaand the Post fell for the trick, hook, line and sinker! "Data shows that Justices Neil M. Gorsuch and Brett M. Kavanaugh have disagreed more than any pair of new justices chosen by the same president in decades." Yep, they have the Post suckered and everyone else, giggling I presume.)

== Side note: does this help House subpoenas? ==

In bowing to state-level gerrymander-cheaters, Roberts declared the courts must defer to the sovereign authority of legislatures. Okay then, does that mean he'll support the right of committees in the U.S. House of Representatives to compel testimony and access records, while investigating Trumpist corruption?

(For 25 years GOP-led committees asserted those powers in 'Clinton investigations' that found absolutely nothing, whatsoever.)

No. Of course he won't.
But it does suggest the writhe-maneuver Roberts will use -- side-stepping any ruling at all - claiming the Court cannot intervene in a tiff between the Legislative and Executive Branch.

Malarkey? Yes. But It leaves Pelosi & co. having to enforce subpoenas with just the Capitol Police, while Trump and A.G. William Barr have every other big guy with a gun in D.C.

Or do they? There is a way around this. A clever approach that I will not relate here.

But let's get back to the main topic, the gerrymandering decision that appears to leave us with no recourse against treason-level cheating, other than revolution. Well... almost no recourse.

One of you, Erik Brandsberg, suggested a drastic measure that could work, short of violent revolution.  It is quite clear in the Constitution: "Each House shall be the judge of the elections, returns and qualifications of its own members.

"The majority in the House of Representatives can set guidelines for electoral fairness, as long as they are not extreme, written to be impartial, providing for equal representation, etc. The rules should be clear and indisputable in their application... based on the fairness of the districts they were elected from. This is a power bestowed upon the house and senate individually that no other branch or chamber can dictate."

A boldly aggressive move... but Mitch McConnell has declared this to be nothing less than a knife fight. He chuckles and brags about it. And so...

The well-reported outrage about Trump’s meeting (again) with his KGB-trained handler, Vladimir Putin, revolves around their jocular mocking of concern about Kremlin interference in U.S. elections, and the even creepier jests about “getting rid” of journalists.

(See a vivid portrayal of just a hundred of the journalists killed or disappeared under the New Czar; and Trump then praised MBS, the journalist-killing Saudi prince.)

But there’s a more telling moment. It's when Trump agreed with Putin’s earlier statement the ‘liberalism’ was ‘obsolete.’ In fact, they meant two different things. Two Scoops referred to U.S. Democrats.

But Putin, in an interview with the Financial Times, meant a far broader definition of the term -- the entire experiment in “liberal” democracy, flat-fair markets, open accountability, free speech and all the other innovations pushed by Locke, Adam Smith and the U.S. founders. Its day is done, he declared, confidently.

To see where he intends this to take this planet instead, with Czarist instincts and KGB ferocity - but freed of any Marxist idealist incantations - I recommend you get a short but chilling, near-future science fiction novel by Vladimir Sorokin called DAY OF THE OPRICHNIK. Then two novels about the coming U.S. Civil War: TEARS OF ABRAHAM by Sean Smith and OUR WAR by Craig DiLouie (pre-order).

Our ancestors stood up. You may have to.

The Court steps up? Oregon shenanigens! And the meaning of July 4.