A war against modernity

A little fame can be pleasant... until it's not. You'll get frustrated standing just a rung or two below influencing events, for example. Or see your ideas enacted without credit (lots of times that's just fine! We're in this together.) Or you can become a target of loony ankle-biters seeking to raise themselves by styling themselves as your nemesis. (Yeah, right.) Some of you have written to me lately about one of those three scenarios.

My response, without getting specific? It is to speak of these matters as I do best... in abstract. Ignoring the piddling and instead taking the big, big overview.

I'll get to that, below. But first:

The open, all-out war by the confederate cabal against modernity is not centered, as some think, on racism. Oh, what silliness. Most confeds don’t view themselves as racist, even if they are. A majority have come considerable distance, in fact.

No, if you distill for the common element in the Fox-led campaign against scientists, teachers, journalists, civil servants, and even law/intel military officers, it boils down to lava-hot spite toward Smart People. Smart people of all races/genders/types.
I've spoken of this before, but it bears repeating.

This cult is based on a two-part incantation: 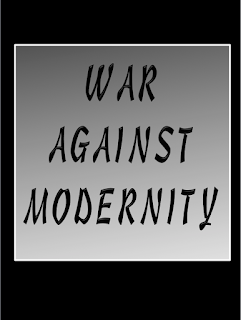 1. We all know that being smart and knowing a lot doesn't guarantee that any individual is wise.

That's an Obvious. No living human would deny it. Oh, but then they warp that obvious-truth into a bizarro version:

2. All people who are smart and know a lot are therefore guaranteed, en-masse to be unwise.

Blink at that a couple times. And yes, that's a precise distillation - an accurate paraphrasing - of how they aim to discredit every single profession of people who work with those inconvenient things called facts. Without ever making it explicit. Because, if stated explicitly, it is obviously insane.

Again, while individual smart/knowing people can be unwise, in general being smarter and knowing more correlates toward wisdom. Wise/smart/knowing folks built the first society ever to escape from thuggish rape-feudalism, challenged the factual basis of prejudice and unleashed fair-competitive-creative minds to assail a myriad challenges.

No one is demanding obeisance to expert authority. Our system wisely pits experts against each other! Scientists, especially, are the most competitive humans ever created. They are the first "high priests" to write popularizations and do PBS shows. Hence, when they reach "consensus" over a model, there's a good chance it's close enough that we should base policy on it... while still poking at it vigorously.

We must confront this lie! But remember, your confed neighbors have a deep supply of incantations.

...ALL of whom are supposedly in a great big conspiracy against “real” Americans while - um - creating nearly all the new wealth…

They are all good guys. Just like the Civil War plantation lords who great-great daddy confederate fought and died for. Funny how their subsidized campaign against smart folks would remove the one obstacle to their total power.

Dear Idiocracy. We smart people have kids. You are our neighbors and we love you. But don’t think we won’t fight, if we must, if our kids' future is at stake. And remember that smart people know stuff. We number many millions, and like Dr. Bruce Banner we know lots and lots of stuff.

Okay, this will seem an odd swerve, but bear with me. Have you been following the vibrant new movements in film?

One of the great things about the terrific movie ‘Black Panther’ (BP) - and seen now in magnificent Idris Elba's role as a cyber-enhanced terrorist leader in "Hobbs and Shaw" - is the liberation of ethnic actors to play meaty-deep villain roles. (It was even better-done in BP!)

True, we're not done fully incorporating diversity into heroic imagery. (My very first protagonist, in ‘Sundiver’ (1979), was of mixed African/Native-American descent. (How many others from that era?) Minority issues feature in most of my novels. And the world is saved by many empowered autistic persons, in ‘Existence.’) Still, it's worth noting when we've come far enough that the most attractive and admired actor in the world can choose to be a delicious bad guy, now and then.

Of course our long range goal is to shatter Category Assumptions that limit any individual's right and power to prove him/her/their/aer/fiz-self to be an exceptional. Sure, along the way, we'll see "forward-lash" and over-reach. Those of us who lived "privileged" as white-ortho-binary males need to make clear what side we're on (I have, a myriad times, as you know), and even shrug aside some unfair lumping, from time to time.

At my almost all-black 60s high school, I winced as occasionally friends lashed me as a "white devil"... then sheepishly came back to me while we both pretended it never happened. I’ve grown a thick skin... and part of love is patience. So long as the DIRECTION is an arc bending toward justice, we must shrug off some degree of unfair righteous (or self-righteous) overcompensation propelled by sincere passion for progress.

What I'll not do is pretzel in apology for my own born-not-chosen categories... which include a category that suffered the worst genocide in the history of this planet, costing me all of my 3rd, 4th, 5th cousins and most of my 2nd. That fact doesn't give me "rank" over others in some hierarchy of oppression. Nothing does that*.

What matters is what you seek to do about the world's ills, starting from whatever platform fate planted you upon, and with whatever talents you can bring to bear. So link here to the simplest, easiest way to start:

Hence back to the topic of villainy. Just as you can be a hero even if born underprivileged, there is no cosmic-karmic law that says being a member of some rising category (minority, gender, ability, poverty) enshrines you personally, individually, in nobility and virtue. In fact, character is often orthogonal to such things. Yes, the noblest hero is the disadvantaged person who takes risks to improve the world. That doesn't vouchsafe others - privileged OR disadvantaged - from being recognized as villains, parasites, whiners or damned liars.

This is why the madness that has taken over today's entire right... and small-nasty islands on the far-left... so despises science, facts, burden-of-proof/testimony or even objective reality. Because most apparent villainy can be resolved either by negotiation (as Black Panther attempts to do with his angry brother) or else refutation-via-fierce-Truth, (as he is eventually forced to do, and we are now forced to do vs. Foxite aggression).

Mythmaking - via Hollywood or via sci-fi -- (congratulations Mary Robinette Kowal and other Nebula winners!) -- is helping us combat feudal-racist troglodytism to evolve ourselves toward StarTrekkian wisdom. So persevere!

Still, we must each, personally, choose how to calmly weigh plausibility and credibility and evidence as real life presents us with judgment calls. Dogma is not a reliable guide across a multi-dimensional minefield.

Powerful psychopaths are examined in a book by Dean A. Haycock, “Tyrannical Minds: Psychoanalyzing history’s meanest men.” The  key point unmentioned here: In light of how often psychopaths have seized power across history and gone on rampages, what prevents our current psychopath from exerting such power, here and now?  The answer is obvious. Donald Trump has been cauterized and almost completely neutralized by dedicated, professional civil servants, who have learned how to both ignore illegal orders and stymie legal-but-crazy ones with work-to-rule. 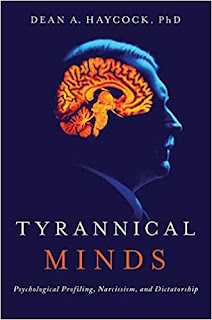 Of course, this protection is being chipped away at by the most dangerous thing Trump does, that gets almost no press attention, exercising his power over appointments and promotions.

Already we see this in judicial picks. Indeed "judges and taxes" are the incanted words used by residually sane republicans to keep supporting what they can clearly see is unsupportable madness. (And of course that makes them the worst sort of knowing and deliberate traitors.) Were he to get 8 years, the effects on the civil service and the "deep state" intel/FBI/military officer corps (the men and women who saved us from Hitler, Stalin and bin Laden and now Putin) would become lethal to our republic.

Dissected here are most of the many appalling aspects of Trump's 90 minute debriefing phone call with Vladimir Putin. Quote Richard Gayle: “In 1964, the conservative writer John Stormer wrote the book, None Dare Call It Treason, which postulated we were losing the Cold War because liberals were working hand in hand with the communists. Republicans made the book a classic.  How ironic that Stormer may well have been on the right track, just the wrong party. Who is working even more directly with a communist adversary than the leader of the Republican party?”

* It's called "oppression bragging." Listing all the persecuted group categories you can check-mark, that give you superior virtue - in lieu of actual achievements - and make you invulnerable to individual accountability. To be clear, a certain amount of this is called for! To counterbalance ancient disadvantages and prejudicial reflexes that are still with us. (More in some than others.) Many kinds of "affirmative action" are still desperately needed! But on an individual basis, category bragging does not cancel out an asshole just being an aggressive asshole.
Posted by David Brin at 8:27 PM 75 comments:

From AI to a changing planet... to UFOs?