As former "great guy" and trusted factotum Michael Cohen testifies in Congress, the right's media calls him a "convicted liar," and we keep waiting for other media to point out the obvious. Alas, it's important to remember that Democratic politicians are absolutely dismal at the art of polemic. They will yatter about grownup things like violations of trust and the law, when we desperately need to peel off just another ten million residually-sane conservative Americans from the collapsing confederate coalition. This will take much-simpler cudgels, like:

"How many 'great guys' must later 'betray' Donald Trump, before you'll admit that he's a lousy judge of character?"

"How many times must Donald Trump hold secret debriefing sessions with communist despots - or conveniently "ex" communist dictators - without any reputable U.S. officials present, before you'll admit something fishy is going on?"

"Here are 100 Fox/GOP/Trump lies. We offer a million dollars in wagers on any or all of them. And if you refuse to bet, it confirms that you are gutless liars."

Oh, I've got a million of 'em, ready to supply to any demo-pol who can imagine using judo, for a change. For example, consider a rock-hard truth about traitors.

Gary Trudeau warned us for 30 years about Roger Stone, the real life "Uncle Duke*." With partners Paul Manafort and Charlie Black, he lobbied for the world’s most despotic dictators and the “Torturer’s Lobby” e.g. Mobutu of Zaire, Marcos of the Philippines, and Putin's puppet Yanukovich of Ukraine. Also casino lords and mafia dons.

Donald Trump was one of Black, Manafort & Stone’s first clients. "Lee Atwater, known for his racist "Southern strategy" politics and Willie Horton fear-mongering, was a partner. It was Stone’s idea for Trump to revive Obama "birtherism" (And you must taunt your mad uncle "Where's the "amazing proof from Kenya" Trump promised, years ago?")

Is this the most spectacularly and proudly evil-stinking part of the "swamp" that imbeciles chanted for the GOP to drain? Or is it the K Street lobbying firms that now write nearly all legislation offered by Republican members of Congress?

Portrayed by Fox as a poor-terrorized 66 yr old geezer, Stone posts beefcake brag-pics of his pecs - (I am older, buffer and braggier, but demonstrably not as evil) - and a tat of Richard Nixon between his shoulder blades. (Mine-own ink is one of those magic eye illusions, the one turning Albert Einstein into Marilyn Monroe… but you really have to squint.) 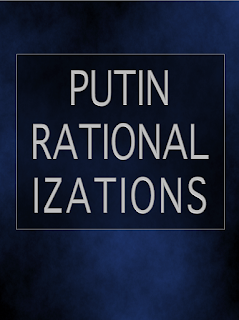 Down in my blog's comment community there’s been an argument that includes contributions from a smart Ukrainian fellow, about whether we should pay close heed to the words of self-justification uttered by the leader of today’s worldwide mafia-oligarch putsch. Our friend from Kiev complains about Russian media that calls his country utterly controlled by Nazis and fascists. Sure, it's nasty stuff. But we need to separate two things: propaganda and the leadership's own rationalizations. Sometimes they overlap. Still, Vladimir Putin has been remarkably open and clear about his rationalizations.

Putin and his clade were raised on contempt for all western concepts of accountability, rule of law, democracy or self-determination. Hence he does not perceive the deposing of Yanukovich in any of those terms. As a Russian, he leans toward paranoia. As a lenin-raised KGB agent, he can see things in no other way. Hence he ascribes the Ukrainian democracy movement entirely to agitprop activity by Western NGOs, not to the Ukrainian people making a sovereign and intelligent choice.

Those western NGOs were - of course - agencies of a conspiratorial war waged against Russian interests by Western powers, especially Clinton and Obama and Clinton, against whom he personally and openly swore revenge. He claims we were the first to us "deniability warfare", via those NGOs. Whereupon his deniable aggressions in Georgia, Crimea and the Donbas -- and Brexit and helping Donald Trump -- are all justified retaliation.

It is very important to read Putin's rationalizations and understand them. It seems he is being quite open and is sincerely angry. Crazy-batshit evil? Yes, and if his oligarchic-mafia cabal wins, then humanity may go extinct. We will certainly lose the stars.

Which means understanding him is even more important than ever.


At last, a democratic politician is stepping up to make Climate Change a core issue. Washington governor Jay Inslee believes his focus on the environment will resonate with voters. And yes, I agree that the climate should be near the top... right under the restoration of FACT as an element in modern life and politics.

But my biggest reason for joy at Inslee's announcement is simple. Senators aren't ideal candidates. Not by historical statistics. Even the generally admirable and wise Sen. Barack Obama lacked experience as an administrator that sapped his ability to get things done, during his narrow, 2-year window of opportunity. A governor or ex-VP gets points, in my estimation.

Dig it, the clever thing would be Biden-Warren, with old Joe making it clear she'd be co-president for one term - while she learned administrative ropes - then his successor for two. Admit it, the combo could both win and deliver.

What a great idea! Sandusky,Ohio, Makes Election Day A Paid Holiday — By Swapping Out Columbus Day.  It solves two problems in one fell swoop. Make this a movement! And on odd numbered years it can alternate with Indigenous Peoples' Day.

Since early 2016 the IRS has quietly repeated  that federal privacy rules prohibit the agency from discussing individual tax matters, but “nothing prevents individuals from sharing their own tax information.”

“The IRS stresses that audits of tax returns are based on the information contained on the taxpayer’s return and the underlying tax law — nothing else,” the agency said. “Politics and religion do not factor into this. The audit process is handled by career, non-partisan civil servants, and we have processes in place to safeguard the exam process.” - according to USA Today.

Still I ask: Can the IRS verify THAT such an audit is underway?
(1) it should be easy, since the subject (DT) has said so publicly and thus waived confidentiality.
(2) Dems should push a bill allowing the IRS to say that much.
(3) It's been 2.5 years, much longer than Mueller in a far less complex matter... so finish the audit already? Push a bill at McConnell allowing the IRS to expedite.

You FAA folks (and other hero civil servants), you have our love. And ground delays are better than crashes. But a suggestion for next time? If FAA folks are seeking a "work action" that still lets them morally do their best job to keep us safe, then can you find a way to de-prioritize corporate and private jets?

A huge-glaring symptom of U.S. wealth-disparity sickness has been the plummet of rich folks using First Class and thus riding the same planes as us. (It is the biggest reason air travel (and security) have deteriorated.) Their separate jetports should be at minimum picketed. Taxes raised. And if they keep pushing us... more. Tax private jets till they scream and return to First Class and fly with us. There is no better way to remind them we share a nation.

* Yes, yes. Uncle Duke was originally based on gonzo journalist Hunter Thompson. But over the years Duke became an archetype for cynical-criminal service to international and domestic despots, hardly a Thompson riff.