Sour & Hot Korea… and Two Scoops of Crazy. And a Democratic ‘civil war’?

Today we’ll offer up a firm prediction about the “Korea Mess,” that no one else out there has offered. (That I know of.)

The worst thing that Americans - (the “Union” side of this phase of the Civil War) - can do is let Confederate/ Kremlin/Fox provocateurs divide us again. They are trying to incite a “fight over the soul of the Democratic Party.” A struggle that’s 99% illusory. Read this incredible piece showing that Blue America is hardly divided at all, when it comes to actual issues and policies.

In The New York Times, David Leonhardt writes, “Stacey Abrams and Conor Lamb are supposed to represent opposite poles of the Trump-era Democratic Party. She is the new progressive heroine — the first black woman to win a major-party nomination for governor, who will need a surge of liberal turnout to win Georgia. He is the new centrist hero — the white former Marine who flipped a Western Pennsylvania congressional district with support from gun-loving, abortion-opposing Trump voters.

"But when you spend time listening to Abrams and Lamb, you notice what doesn’t fit the storyline: They sound a lot alike.”
Know this. If you buy into the notion of some “struggle for the soul” of the Democratic Party, then you are likely either a genuine Marxo-leftist — a legitimate position, but be open about it — or else a Fox/Kremlin troll… or else one of their sappy tools. You are - at best - no help at all.
== Prelude to giving Kim a win-win-win ==

Headline: “Trump's lauded North Korea summit increasingly looks set to blow up in his face.” And this is surprising, how?  The agenda of Kim Jong Un should be as plain as the nose on your face. Though, like your nose, you cannot see it.

Consider. Kim must reduce his huge conventional military, or North Korea will be a smoking economic ruin and portions of the army might become dangerous to him.

He also desperately needs a reciprocal draw down of U.S. and S.K. troops and assurances of general safety from regime change.

But here's the key point: his nukes - (achieved with major outside help by powers who have more control over this than anyone admits) - were never a "crazy man's way to lash out."  Once you have them, nuclear bombs are cheap!

And hence this prediction: Kim will never negotiate away retaining half a dozen nukes as a deterrent, though he'll likely hand over some as bargaining chips - plus foregoing any further production - in exchange for a general slashing of expensive conventional armies... plus the "incentive" of massive aid already promised by Trump.

Kim knows that DT cannot walk away from this table.Trump is desperate for a "Nobel" win. He will do anything for it. So Kim will insist upon:

- half a dozen nukes to deter "regime change" and within striking distance of Seoul.
- a slashing of all conventional forces, including his own which are bankrupting him.
- ending sanctions and lots of aid.
- face-saving gestures to help Trump, symbolically.

Why that last item? 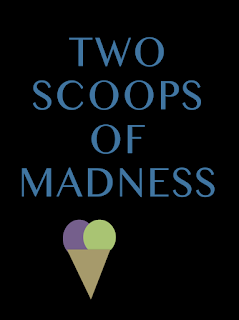 By blaring a "tough, great deal" for the U.S., ol' Two Scoops might save his political heinie here at home...

...which is the wish and need of Vladimir Putin, desperate to protect his greatest asset.  Oh, and there will still be 5 or 6 NK nukes, which can deliver an EMP to us at any point, while Kim's sponsors and masters retain plausible deniability.

Sound paranoid? Conspiracy-ish?  Please, instead of reflexively sneering, tell me exactly which part? What part of this win-win-win-win isn't plain as... oh, yeah.  You cannot see your own nose.

Okay, let’s dive into those common themes of the Trump Presidency.  Amy Siskind is keeping a list of everything Trump and company does that violates norms or pushes us toward authoritarianism or violates humanity. Her first book, "The List", covers the first year of Trump's presidency.

My own version of this is to cite the ancient expression “cui bono”?  Or who benefits? Asked by the detective in every crime story.

Case in point: After Trump announced his prescription drug plan to cut costs... the stock of every single pharmaceutical company skyrocketed. Every study shows that one thing - allowing government agencies to negotiate prices (now insanely forbidden) would make the biggest difference. Two Scoops explicitly forbade that.

Or take another, much more urgent example: The top beneficiaries of ending the Iran deal were the Iranian mullahs, plus the war hawks on both sides. And any actual war will benefit Putin by raising oil prices, but above all, giving Russia a Persian Protectorate.

Think down-range! How would the U.S. defy such a merger? How could a US-Iran war have any other outcome that the Kremlin "saving" Iran by extending its umbrella? Seriously, offer up a scenario 1% as likely...

...and who do you think benefits from Trump's steady demolition of our alliances?

Again re North Korea? With every prisoner release and such, look ... at... who... benefits. 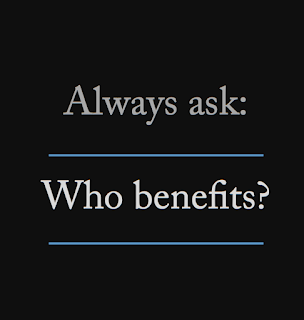 Trump, the Saudis, Putin, North Korea, and the Iranian mullahs... but...

The ones I can't figure out are the Israelis. Superficially, an alliance with Trump and the Saudis vs. Iran seems to oppose Putin and make sense... but there is no underlying logic based on actuality. Yes, an Israeli-Saudi detente might benefit both, and Iran makes a good bete noir. But if any deal includes the Palestinians (giving Trump a triumph) then the whole Iranian rationale for hatred of Israel dissolves.

Are the Israeli leaders really so stupid that they see this wholw trend benefiting them?

Spread the meme. Ask: "who benefits?"