Tech obsolescence? Universal Basic Income? And the Age of Amateurs

Thought provoking for the coming weekend: Stewart Brand’s “Long Now” reflections about which aspects of our world change rapidly... and which more slowly... and how this can help us grapple with vital issues, like education.

One from my own such list: About a century ago, John M. Keynes prophesied that rising industrial production would pour forth so much wealth with such automated efficiency that the forty hour week (just then coming into fashion) would be reduced to thirty hours, then twenty, as jobs were shared and and the working class got more leisure time.

As it happened, there was a vast world out there that still needed to industrialize, and the West’s appetite for ever-more goods kept factories and mines etc. humming hard for all of those decades. Indeed, the developing world uplifted itself primarily out of the spending by Americans and others, of trillions of dollars on mountains of crap we never needed. A strange - and by far the most successful - kind of foreign assistance. And yet it never threatened the 40 hour week.

But there’s something on the horizon. A century forestalled, the era foreseen by Keynes seems about to dawn, with automation appearing about to render most kinds of human industrial employment wholly or partially obsolete. Indeed, many white collar jobs and even creative tasks seem prone to takeover by AI systems. Local production of goods and food may end the long chains of container ships crossing oceans, an ecological godsend, but perhaps tipping the world economy into convulsions.

Yes, there will be job losses... accompanied by vastly improved ability to produce anything humans want.

If the Keynes era dawns, then we’ll face decisions:

- Who will own the means of production and the cornucopia that pours forth? If it is a classic, feudal pyramid, then exploitation and unfairness are guaranteed, followed by revolution. But it needn’t be that way. 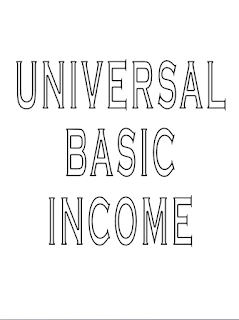 - Will paychecks be replaced by UBI or Universal Basic Income? Or else by giving every citizen a “share” in these urban factories and farms, so they can live off dividends?

- Either way, how will folks spend their time?  We are already in an under-appreciated era of hobbies, pastimes, avocations and amateur sagacities. There are more blacksmiths and sword makers in the U.S. today that in the Wild West or European middle ages.  In my novel Foundation’s Triumph… and separately in EARTH… I posited an Age of Amateurs, and it is already here -- almost completely ignored by pundits, economists and jeremiad-spewing pessimists.

But… will that suffice for all people?

- If all of this happens under the guidance of Artificial Intelligence, will they help us to design better ways for a better era?  And will we agree with those super-minds about what “better” means?

A living human may spend a whole life earnestly improving. He or she may become among the wisest of our wise.  Then they die.

The one thing that can improve cumulatively... and after 6000 years of feudalism, we finally did start to do it... is civilization.  We are better, stronger, more perceptive and knowing and -- yes -- wise than all our ancestors. As the best of those ancestors would have wanted!  (Indeed, if they failed to make this happen, then that indicts them as unwise! The best compliment you can pay the "Greatest Generation" is to admit that they made America even greater, and then greater still.)

This rising path is not because of some leftist historical imperative. Nor is it the right's insane teleology of so called "cyclical" history. It is the result of several Enlightenment inventions like reciprocal accountability, that foster positive sum games. Those games mean that a civilization that outlives human members can grow wiser than the sum of its parts.

Fanatics hate this concept! They want the individual human soul to be the only thing that matters.  Zero sum. You get to be a lord or a peasant. You're "saved" or spend eternity in some sadistic hell. But if there are positive sums, then there is something better, greater, more important than one egotist's soul. That more important thing is... us.

I believe that. Hey, let's admit that I have an ego the size of the sun! And yet, I avow that I'm relatively unimportant. There are things worth dying for. And we are building them. Together. 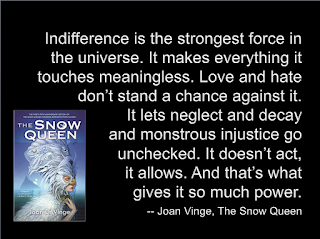 One of you reminded us of a quote  quote from Joan Vinge, in her prize-winning novel "The Snow Queen."

"Indifference is the strongest force in the universe. It makes everything it touches meaningless. Love and hate don’t stand a chance against it. It lets neglect and decay and monstrous injustice go unchecked. It doesn’t act, it allows. And that’s what gives it so much power."

Your Biases: This site offers a poster of hugely important wisdom about the ways we fool ourselves. These are somewhat different than "logical fallacies."  They overlap, but are separate things. (The same folks offer a logical fallacies poster.)

Onalytica: This site specializes in tracking topics and traffic in order to trace who are the biggest "influencers" in each of several dozen fields.  Imagine my surprise when their influencer chart of Artificial Intelligence (AI) had a familiar face at the very center of the mesh.  Oh, this isn't the first group to reach a similar metric-conclusion about my place in the discussion.  I just find it rather... well... not entirely plausible!

Still, there's a need to rock any set of comfortable assumptions, especially in such an important field. And poking is what I do...  Let's all poke away!

Poor millennials! Here's a good story on the millennials' challenges and economic changes. More than a bit whiney, but there are legitimate complaints. And yes, the ones I have met are better people than boomers! And yes, that is to the credit of boomers and X-gens! Because we were clearly great parents.

Forget doll houses! This New York exhibition offers miniature landscapes and cityscapes with moving cars and people and a variety of techniques.

The ‘500 mile problem’ is especially acute between LA and San Francisco. It will be a decade before the Super-High Speed Train is completed… or Elon’s alternatives get traction… and the airport hassle is nasty.  So a new company is offering luxury sleeper busses that deliberately slow down to keep the ride smooth and so that you’ll get a full 8 hours.

This Goop Shaman cleanses your wardrobe of evil spirits. Some people simply have too much money. It's our duty to relieve their burden. The bigger picture? This was “wisdom” in 99% of the societies our ancestors lived in. Enemies of the enlightenment want to bring back this darkness… and not all of them are on the mad-right.  The left has its… (sigh.)

A philanthropy prize award winner Community Warehouse sells high quality, donated construction materials and staffs the operation with ex-offenders. Taking a page from Costco, the organization is members-only and offers low-prices to members, which include landlords in the neighborhood. Through its straight-forward operation, the Warehouse serves ex-offenders, the neighborhood, and repurposes materials from construction sites all while running a business near break-even.

Separated at birth? We all run into or spot humans who look a bit like us. Lots of folks used to comment on my (I think vague) resemblance to Andre Agassi. Now some say I’ve got “a total Peter Gabriel thing going on.”  PG is a hero of transparency who has funded Project Witness for decades, so that’s cool.  I wish I had a voice like his.

Proclamations of doom are perennial flowers which have sprouted in the garden of human imagination since earliest times. Oracles appeared whenever turmoil caused nations and peoples to feel uncertain about the future. From ancient Sumer, to India, to Iceland, astrological portents used to set off recurring waves of public hysteria. In honor of the coming (or not-coming) Rapture event... may I reprint an article of mine from the last century? It seems even more relevant today. Alas.

== And More miscellany of interest! ==

Here's a very tiny sampling of past apocalypse ravings. Maybe 0.0001%.  In case you missed the reason. Here's the latest silliness. There has got to be a way to corner guys like this into making a bet on it! Better yet, go to his followers and offer pet-care contracts... we'll take care of your pets after you rapture. But pay in advance!

Yipe! There actually are “after the rapture pet care” sites! They cover a whole range. This one is hosted by (they assert) rapture believing evangelists whose apparent sincerity is only exceeded by their stunning hypocrisy. They guarantee that their volunteers are unbelievers who won’t be saved… and who will nevertheless sign up to do this – without any vetting or listing of those ‘volunteers’ by location or any guarantee they actually exist. Never mind that. The trusting folks who register (for a $10 fee, kept by the organizers) can then dismiss all worries from their minds, content that some damned-but-generous atheist or Jew will slog across the apocalypse, with blood pouring from his or her eyes, to care for your cat (when there will be vastly more urgent calls for compassion, nearby), and do all that for zero compensation. Never mind that you prayed daily for Armageddon to bring this suffering to anyone not exactly like you. Rest assured that these vetted martyr-saints will handle everything for Fluffy, while dodging seven-eyed scorpions and Beasts and lion-horses…

…as stunningly depicted in this fabulous, terrifying/hilarious web comic by Patrick Farley.

But… wait… what did I just call those volunteers? Could that mean what it seems to mean?

Possibly less of a scam are sites created BY the non-saved, who treat it as a business venture that can be enforced and supervised by the rapture-saved folks' Jewish (and presumably left-behind) lawyers.

On a lighter note. Some of you may recall that GLORY SEASON featured – along with feminist genetic engineering and other marvels – a rustic version of Conway’s Game of Life. Here’s one more simulator to play with.

Now... rise up and believe again! Lovely. Procul Harum in 2006 doing “Whiter Shade of Pale” with a pops orchestra.

And end on a note of enjoyment. Entertaining…. Best stunts of the year.  And we’re supposedly decadent?   Age of amateurs, indeed. We are beyond amazing. We're amazingly amazing!