My father, Herb Brin was a poet, journalist, and publisher – and one of the most colorful figures to practice the craft of journalism, both in Chicago and Southern California. He passed away 10 years ago today. (2/17/1915 - 2/6/2003)

Herb was born in 1915 in Chicago to a poor family of Jewish immigrants from Poland and Russia – in an era when signs posted on some windows read “No Jews and Dogs Allowed.”

In the years before America's entry in World War II, Herb infiltrated the German-American Bund for the Anti-Defamation League, then became a gangland reporter for the legendary City News Bureau in Chicago. He quickly gained a reputation for tough and fearless reporting, but with a unique tone of heart and compassion. 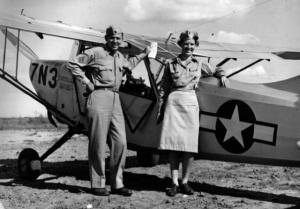 Herb served as an army reporter during World War II, then he joined the Los Angeles Times as a respected feature writer, covering everything from local pothole scandals to the Khruschev-Eisenhower summit and the trial of Adolph Eichmann in Jerusalem. In 1954, he launched the Heritage Jewish newspapers across Southern and Central California. Its motto, inscribed above the masthead, was a commandment from Deuteronomy: “Justice, Justice Shalt Thou Pursue…”

As the paper's star investigative reporter, Herb broke many stories, including early revelations about the heroism of Oskar Schindler, the crimes of Klaus Barbie, and the plight of Soviet Jewry and other oppressed people. He stood not far from Robert Kennedy the night the Senator was shot and killed. Herb’s social activism – generally liberal – took quirky, individualistic and sometimes downright contrary turns that sometimes irked friends on the left. But his willful independence and cheerfully cantankerous eagerness for a good story endeared him to thousands and helped to weld Southern California Jewry into a strong and eclectic community.

Herb traveled extensively, to Israel and Spain, Poland and Germany, writing poignant soul-searching reflections on history.  “Where there is conflict, pray for conscience,” wrote Herb.

Brin was also a world-renowned poet, whose collections were prefaced by great names like Nobel Laureate Elie Wiesel, who wrote,  “How a journalist, how an editor could also be a brilliant poet is a source of astonishment – and of gratitude.”

But none of these accomplishments even hint at the vividness of this “character” who made a strong impression upon everyone who met him: eager, argumentative, unfailingly generous, and always interested in the underdog. 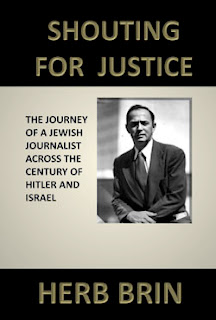 Recited to tape just a few years before his passing, in 2003, Herb’s autobiography, Shouting for Justice: The Journey of a Jewish Journalist Across the Century of Hitler and Israel, touches upon the highlights of a most unusual and illuminating American life. A fighter for his people and for a more just world.

See the extensive tribute page that contains selections from his autobiography, travelogues and poetry.

“Not to the weak of heart does artistry belong,” Brin declares in the opening line of his book of poems, Justice, Justice, Poems Reflecting the Measures of Man. Herb brought to his poetry the same burning indignation against tyranny, the same compassion for the persecuted as he did to the readers of his widely-quoted Heritage column, "Across the City Desk."

With every word and stanza, Herb holds a lantern to the humanity and all too frequent inhumanity of mankind, as he weeps for a child’s tear, reminisces over lost love…or chronicles the pangs of aging.

A remarkable man indeed -- he is missed.

Here is a sampling of Herb’s poignant poetry, from his book, Poems from the Rubio:

A Song of Magic

Hold back your clocks
Damn it, no requiem for me!
I’ll rust those gears
With the fine spray of seas
That sweep my autumn years.

Crusts of age clog my knees
But I’ll get along
At a lesser pace.

And softer my sighs
Gentler, more gentle
And as suns descend
I’ll get along
It’s moonlight saving time
For me.

I’ve many a mountain yet to climb
And the hot breath of lips on mine
And the touch of tender hips.

The brook, the stream, the massive sea
Hold many mysteries for me
And books unread
And paths untrod
Primeval forests beckon me.

Don’t speed my way to dreams undreamed
I’ve cantatas to create
I’ve heady lilacs yet to sense
And little foxes to divine.

And this one from Wildflowers: A Garden of Jewish Verse

How very wonderful his poems are, leading to dreaming images. I see this same marvelous skill and ability in your writing!! Thanks for sharing these with us.

Pleasant, would not require the "Poetry appreciation chair".

The West owes a great debt of gratitude to the culture that has gifted us with almost 6000 years of continuous literacy.

We are as individuals a summation of the parts that formed us.

We are as a nation....likewise.

Amusing. IMB is sending its baby supercomputer off to college.

Remember "A Canticle for Leibowitz"?

"When the moment of danger came, Ali Imam Ben Essayouti knew just what to do. The delicate, unbound parchment manuscripts in the 14th-century mosque he leads had already survived hundreds of years in the storied city of Timbuktu. He was not about to allow its latest invaders, Tuareg nationalist rebels and Islamic extremists from across the region, to destroy them now.

So he gingerly bundled the 8,000 volumes in sackcloth, carefully stacked them in crates, then quietly moved them to a bunker in an undisclosed location.

“These manuscripts, they are not just for us in Timbuktu,” Mr. Essayouti said. “They belong to all of humanity. It is our duty to save them.” "

The good news is that the staff of the Ahmed Baba Institute, which held the largest collection of archives managed to smuggle most of their collection out before the Islamists burned the rest.

Timbuktu is where the library collections of the Emirate of Cordoba ended up after the Reconquista. MOST of the classic Greek and Latin texts we have, we have from copies that survived in Muslim Spain.

Quite apart from the African texts, its a virtually certainty that amongst the texts in Timbuktu are lost works by the likes of Euripides and Aristotle.

Once the city is secured and the immediate humanitarian crisis is addressed, there needs to be an urgent project to digitize as many of the manuscripts as possible.